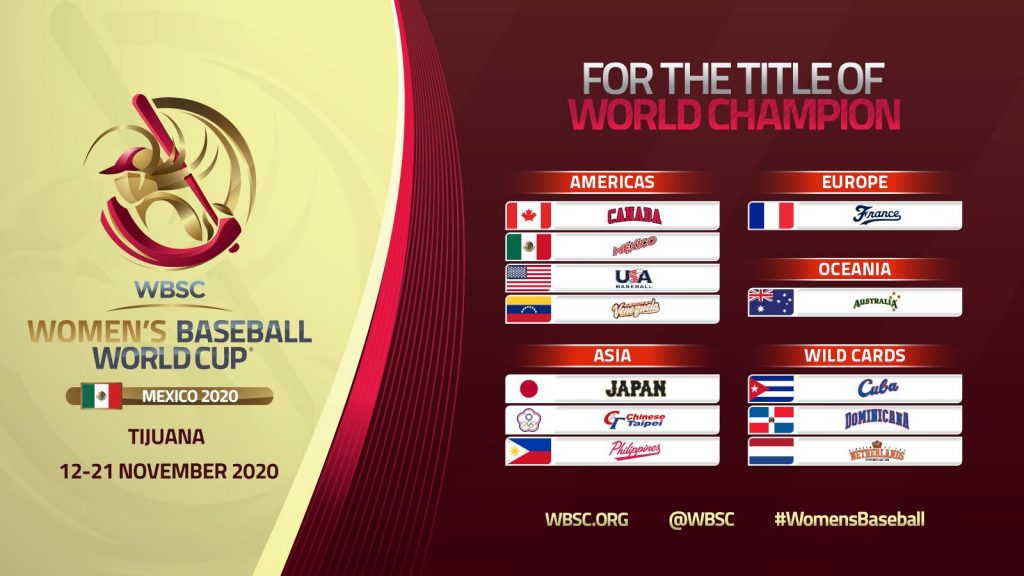 The WBSC Women’s Baseball World Cup was originally scheduled to take place from 11-20 September, and has since been rescheduled due to the outbreak of COVID-19.

“The WBSC is excited to have a great baseball city like Tijuana and great baseball nation like Mexico host the top event in women’s baseball, the Women’s Baseball World Cup,” said WBSC President Riccardo Fraccari. “I am confident that our Mexican hosts will provide the perfect stage for the best women’s baseball players in the world to compete on.”

Twelve teams will compete For the Title of World Champion in Tijuana:

The Women’s National Baseball Team of Japan has won the last six editions and will carry a 30-game World Cup winning streak into Tijuana.

Mexico, France and the Philippines will be making their first-ever appearance in the WBSC Women’s Baseball World Cup.

USA, Venezuela, Canada and Mexico qualified as the top four squads from the first-ever Pan-Am Women’s Baseball Championship in 2019.

Japan, Chinese Taipei and the Philippines gained entry into the WBSC World Cup as the top three finishers from the Women’s Baseball Asian Cup last November.

At the last Women’s Baseball World Cup (2018), Japan topped Chinese Taipei in the Final, while Canada defeated USA for the bronze medal at the USSSA Space Coast Complex in Viera, Florida.

In 2016, Japan defeated Canada in the Final, while Venezuela walked-off with a bronze medal victory over Chinese Taipei at Hyundai Dream Ballpark in Gijang, Busan, Korea.

The Women’s Baseball World Cup grew from a five-team (USA, Japan, Canada, Australia and Chinese Taipei) tournament in the inaugural edition in August 2004 in Edmonton, Canada, to seven teams in 2006 in Taipei (Cuba and Hong Kong made their debuts), to eight teams in 2008 in Matsuyama, Japan (the newcomer was India), to 11 teams in 2010 in Maracay, Venezuela (the host nation, Puerto Rico and Korea made their debut).

The number of participants was eight in 2012, when Australia and the Netherlands made first appearances in a Women’s Baseball World Cup. A record 12 teams competed in 2016 in Gijang, with Pakistan making their debut. The Dominican Republic made their historic debut in 2018 in Viera, which also showcased the current 12-team format.