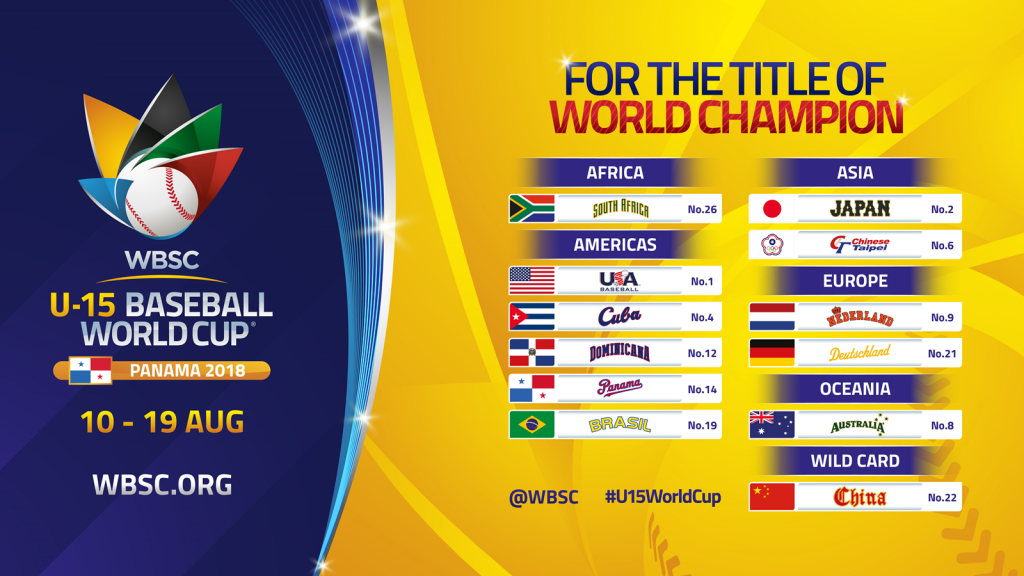 LAUSANNE, Switzerland China will send its first-ever youth National Baseball Team to a world championship, as the World Baseball Softball Confederation (WBSC) awarded the Asian nation a wild card into the U-15 Baseball World Cup® 2018, to be staged 10-19 August in Panama.

China is the 12th and final nation to be confirmed for the U-15 Baseball World Cup, baseball’s pinnacle tournament and highest level for players aged 13-15. China is currently No. 22 in the WBSC Baseball World Rankings and No. 4 in Asia.

“With our sport’s renewed Olympic status, baseball and softball’s growth and popularity have been accelerating in China,” said WBSC President Riccardo Fraccari. “China’s inclusion in the U-15 Baseball World Cup will further boost youth programmes and help identify talent — and potential future stars — across the nation, while attracting new Chinese audiences to our game.”

Set to compete For the Title of World Champion at the IV WBSC U-15 Baseball World Cup 2018 will be National Teams from all five Olympic continents: Africa, all the Americas (North-, South-, Central America and the Caribbean), Asia, Europe and Oceania.

The 12 National Federations will have until 31 July to evaluate and select the 20 best players in their respective countries/territories and officially submit their 20-player National Team rosters.