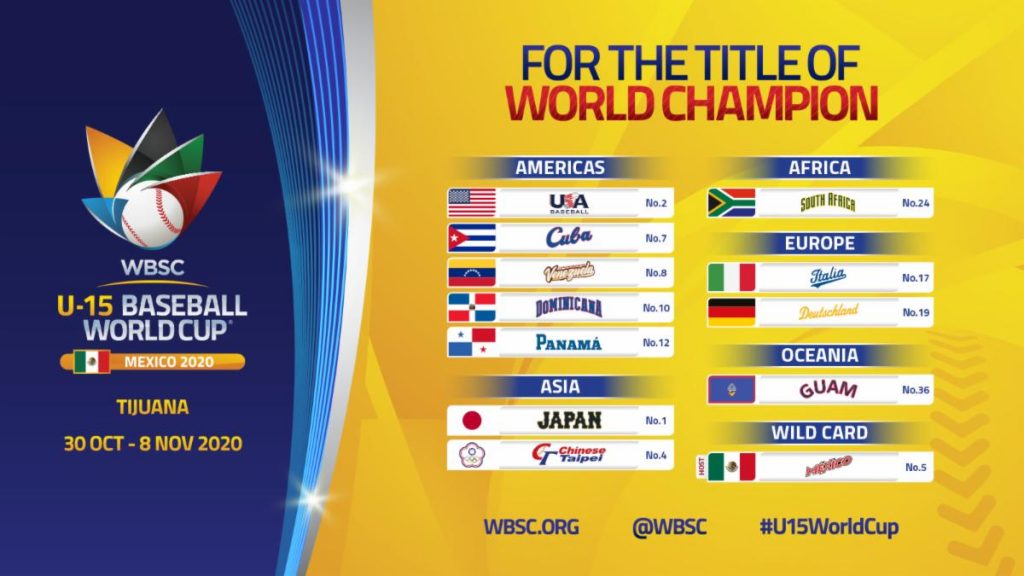 LAUSANNE, Switzerland. The World Baseball Softball Confederation (WBSC) announced that Tijuana will have the honour of hosting a WBSC Baseball World Cup double header for the first time following the confirmation that Mexico’s sixth largest city will host the V WBSC U-15 Baseball World Cup 2020 from 30 October to 8 November. The tournament was originally scheduled from 14 to 23 August before being postponed due to the COVID-19 pandemic outbreak.

The announcement follows the confirmation on Tuesday that the WBSC Women’s Baseball World Cup will also be held in Tijuana from 12-21 November.

“Having Tijuana confirmed as host of two premier WBSC World Cup events back-to-back represents how much baseball means to the city,” said WBSC President Riccardo Fraccari. “This is the first World Cup double header in our history, providing a wonderful opportunity to celebrate baseball and sport as we look forward to the restart of the international calendar.”

The WBSC U-23 Baseball World Cup 2020 is currently scheduled to officially restart the WBSC international baseball calendar, taking place from 30 September to 9 October in Ciudad Obregon and Los Mochis, also in Mexico.

Tijuana will host the fifth edition of the WBSC U-15 Baseball World Cup. It will be the third edition played in Mexico.

The first U-15 Baseball World Cup was played in Chihuahua in 2012. Venezuela defeated Cuba in the final with Chinese Taipei finishing third. Cuba won in 2014 in Sinaloa and in 2016 in Iwaki, Japan. USA finished second in 2014 and Venezuela earned a bronze medal. USA settled for bronze in 2016 and Japan earned a silver medal.

USA and Panama contested the final of the WBSC U-15 World Cup 2018, with USA winning their first-ever world title in this age category and sixth title overall (there were 13 editions of the World Youth Baseball Championship from 1989-2011). Chinese Taipei finished third.

Twelve teams will compete For the Title of World Champion in Tijuana:

Guam and South Africa were the last sides to be confirmed in the tournament.

World No. 36 Guam outscored New Zealand, ranked 39th in the world, in the U-15 Oceania Championship final. It’s the first time Guam has qualified for a WBSC event since becoming a member of the Baseball Federation of Asia (BFA) and of the International Baseball Federation (IBAF) in the 1980s. The closest the federation has come in the past was a shot at the 2000 Olympics but lost a play-off against South Africa.

The Africa confederation did not organize a qualifying tournament, so the spot went to South Africa, the highest-ranked team on the continent.

Germany and Italy were the first teams to qualify. They earned their right with wins in the semifinals of the U-15 European Championship played in Nettuno, Italy, in July 2019. Germany defeated the Czech Republic, 13-2, while Italy came from behind to beat the Netherlands, 5-3. Germany went on to outscore Italy, 10-3, in the final and claim the Continental U-15 title.

Japan and Chinese Taipei qualified out of the U-15 Asia Baseball Championship, which was played in Shenzen, China, last August. Chinese Taipei advanced to the final with a 2-0 win against Korea at the end of an eight-inning drama. Japan outscored the hosts China, 10-0, in the other semifinal. The championship game was rained out and Japan was proclaimed the Asia U-15 champion because of previous results in the tournament.

Last September, the top five National Teams in the Pan Am Championship qualified for the U-15 Baseball World Cup. USA topped Panama, 3-1, in the final played in Playa del Carmen, Mexico, to earn their fourth-straight continental title. The Dominican Republic edged Cuba, 4-3, in the bronze medal game. Venezuela earned the final spot finishing fifth above Mexico. Mexico was given a wild card by the WBSC Executive Board and will thus represent the fifth National Team from the Americas to compete in the WBSC U-15 Baseball World Cup 2020.