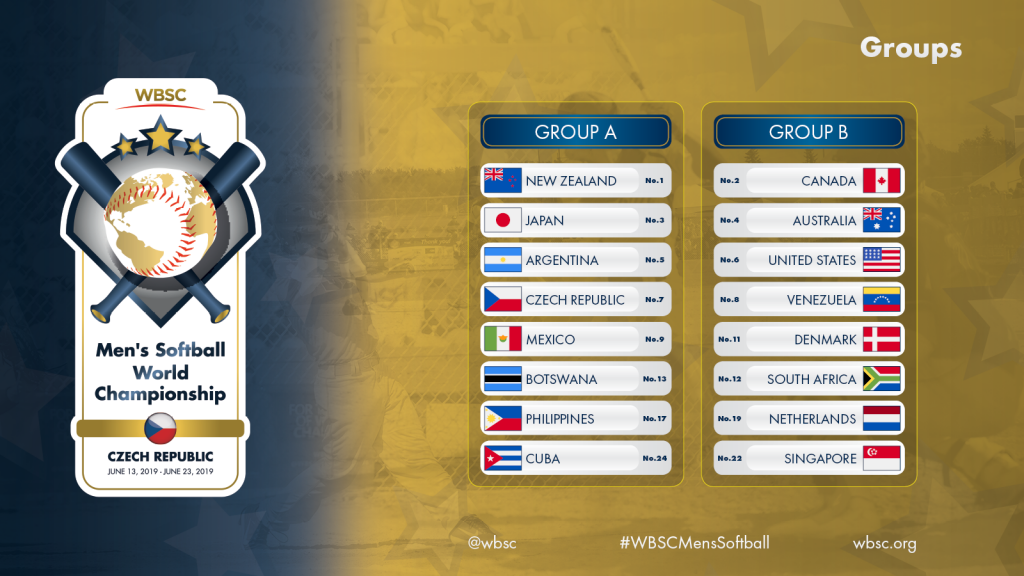 The World Baseball Softball Confederation (WBSC) announced the group draw and a 72-game schedule for the XVI WBSC Men’s Softball World Championship 2019 — the highest-level softball competition on the planet — which will be held from 13-23 June in the Czech cities of Prague and Havlickuv Brod.

“Having teams from every continent in each of the two groups is another manifestation of men’s softball’s global impact, and how WBSC softball competitions are embraced all around the world”, said WBSC Softball Division Chairman, Tommy Velazquez. “Staging the first ever flagship men’s softball world championship in Europe is just another step in the WBSC strategy to expand softball across the planet, and strengthen the game as a true worldwide, massive sport, both in men and women’s branch.”

The men’s softball pinnacle tournament will feature 72 games across 11 days of competition, before crowning the best softball team in the world.

The World Championship Finale is slated to be played on 23 June at 19:30, following the bronze medal match at 16:30.

After the Opening Round, the top four teams of each group will advance to the playoffs to battle For the Title of World Champion in an eight-team, single-elimination bracket.

To view the full schedule — as well as all tournament information, including rosters, stats and standings — of the WBSC Men’s Softball World Championship (MSWC) 2019, visit the official tournament website at mswc.wbsc.org.