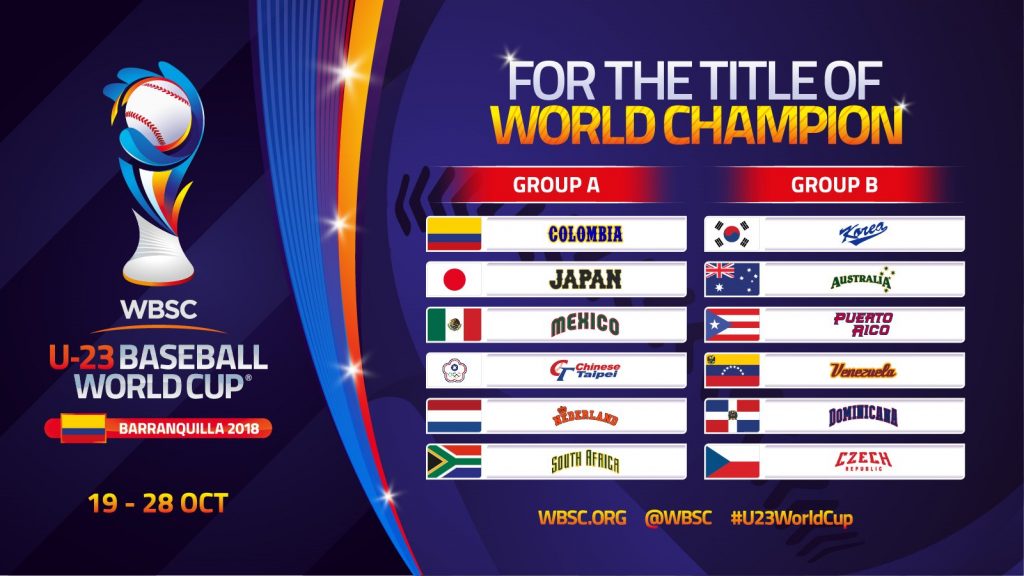 The World Baseball Softball Confederation today announced the group draw for the WBSC U-23 Baseball World Cup® 2018 — the year’s top international baseball competition — which will take place in Barranquilla and Montería, Colombia, from 19-28 October.

“The groups of the U-23 Baseball World Cup are both global and balanced, and will lead to exciting and challenging games for the athletes and National Teams from day one,” said WBSC President Riccardo Fraccari.

Group A features representatives from Africa, the Americas, Asia and Europe: host/world No. 16 Colombia, No. 2 Japan (defending U-23 World Champion), No. 5 Mexico, No. 6 Chinese Taipei, No. 9 Netherlands and No. 26 South Africa. Group A competitions will take place at the newly inaugurated US$ 33 million, 12,000-seat Edgar Renteria Baseball Stadium in Barranquilla.

Group B features representatives from the Americas, Asia, Europe and Oceania: No. 3 Korea (2016 3rd-place finisher), No. 8 Australia (2016 runner-up), No. 10 Puerto Rico, No. 11 Venezuela, No. 12 Dominican Republic and No. 18 Czech Republic. Group B games will be held at the 12,000-seat June 18 Baseball Stadium (Estadio de Beisbol 18 de Junio), home of the Colombian Professional Baseball League’s Leones de Montería.

The winner of the U-23 Baseball World Cup will be awarded 690 world ranking points — the largest award of any international baseball event this year and third-largest overall, following the major international competitions, Premier12® and the World Baseball Classic.

The official tournament microsite U-23 Baseball World Cup has been launched at u23bwc.wbsc.org and is available in six languages (English, French, Japanese, Korean, Spanish and Traditional Chinese).