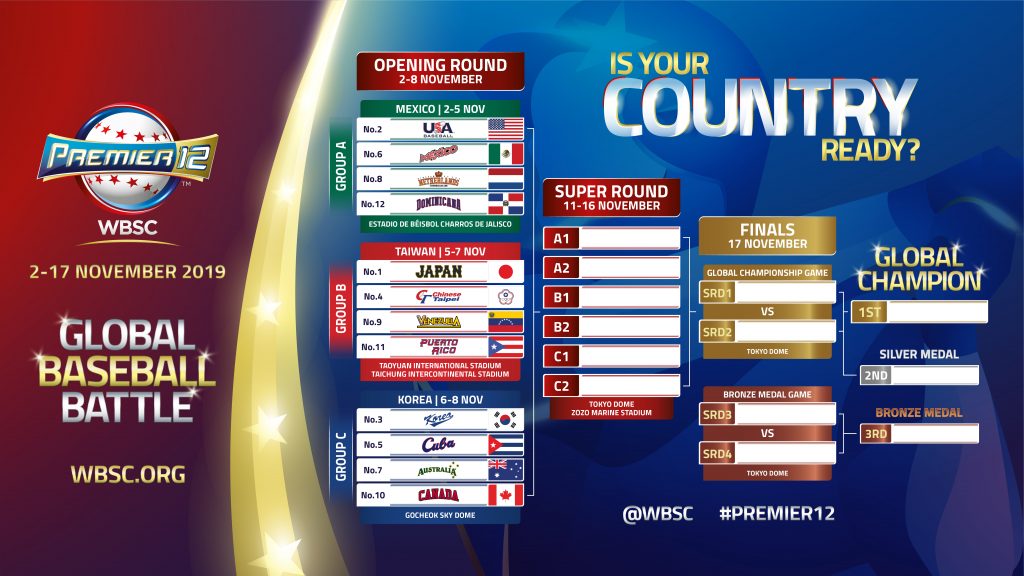 SEOUL, Korea — 30 September 2019 — Ticket sales have been launched for Group C of the 2019 WBSC Premier12®, which will be played at Seoul’s Gocheok Sky Dome from 6-8 November and feature the Men’s National Baseball Teams of world No. 3 Korea — the defending Premier12 and Olympic champion — No. 5 Cuba, No. 7 Australia and No. 10 Canada.

As part of a ticketing and sponsorship agreement, and in partnership with host Korea Baseball Organization (KBO) league, national and global ticket sales for Group C of the WBSC Premier12 will be made exclusively through Korean e-commerce leader Interpark at http://inpk.kr/premier12en (English) and http://inpk.kr/premier12 (Korean).

“The WBSC Premier12 is generating unprecedented fan interest, many times greater than the successful inaugural edition in 2015, so it’s extremely fitting to have the support of Korea’s leading online ticketing platform, Interpark, for Group C sales,” said WBSC President Riccardo Fraccari. “The Premier12 is on track to become one of the biggest international baseball tournaments in recent history and one of the top global sporting events of the year.”

Tickets for Group A in Guadalajara, Mexico, can be purchased at ticket offices at Estadio Charros de Jalisco or online at https://boletomovil.com. Host Charros de Jalisco professional baseball club of the Mexican Pacific League (LMP), expects to sell all or nearly all the 96,000 total available tickets for the six Group A games between No. 2 USA, No. 6 Mexico, No. 8 Netherlands and No. 12 Dominican Republic, while generating a 600 million peso ($30.5 million USD) impact for the local economy.

Group B – Taichung and Taoyuan, Taiwan

Tickets for Group B, hosted by the Chinese Taipei Baseball Association (CTBA) and featuring top-ranked Japan, No. 4 Chinese Taipei, No. 9 Venezuela and No. 11 Puerto Rico, can be purchased at FamilyMart, one of Taiwan’s biggest convenience stores, and online at www.famiticket.com.tw. Tickets for the game between Chinese Taipei and Japan at the 20,000-seat Taichung International Stadium on 7 November sold out in less than 30 minutes after sales launched on Friday, 13 September.

Tickets for the Super Round and Finals at the Tokyo Dome can be made via Lawson at https://l-tike.com/st1/premier12-tokyodome.

Super Round games at Chiba’s ZOZO Marine Stadium can be made via Lawson at https://l-tike.com/st1/premier12-marinestadium.

The top two teams from each group will advance to Japan to compete in the Super Round from 11-16 November.

The most important international baseball competition in recent history, the flagship WBSC Premier12 will award two tickets to the Tokyo 2020 Olympic Games, in addition to $5.2 million USD in prize money.

The II WBSC Premier12, which will feature the Top 12 nations in the WBSC Baseball World Rankings, will be staged over 32 games from 2-17 November. Qualifying for the major international event are the Men’s Nati­onal Baseball Teams of world No. 1 Japan, No. 2 USA, No. 3 Korea, No. 4 Chinese Taipei, No. 5 Cuba, No. 6 Mexico, No. 7 Australia, No. 8 Netherlands, No. 9 Venezuela, No. 10 Canada, No. 11 Puerto Rico and No. 12 Dominican Republic.