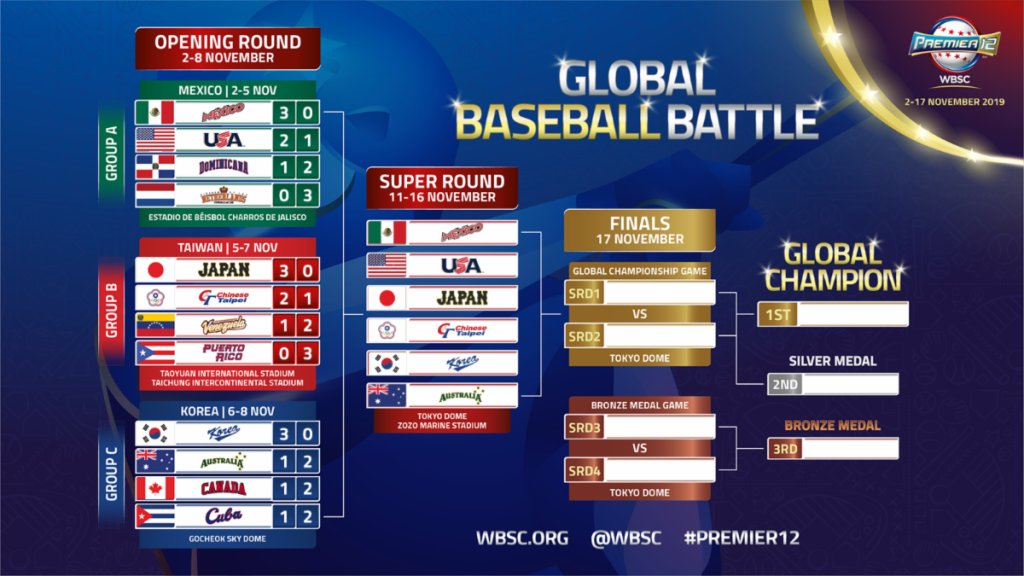 08 November 2019 — The World Baseball Softball Confederation today announced the 2019 WBSC Premier12 Super Round schedule, which will be played over 12 games from 11-16 November at the Chiba’s ZOZO Marine Stadium and the Tokyo Dome in Japan. The top two teams in Super Round will meet in the Global Championship Game on Sunday, 17 November.

Day 1 Super Round starting pitchers will be announced at the pre-event press conference on Sunday, 10 November.

Day 2 of the Super Round features a clash between the two top-ranked baseball nations in the world — Japan and USA — at the Tokyo Dome, while rivals Korea and Chinese Taipei go head to head at ZOZO Marine Stadium, and Oceania’s top baseball country Australia will meet Mexico in the day’s opener.

Mexico, Japan and Korea won their groups and will enter the Super Round carrying over their respective Opening Round head-to-head victories over the US, Chinese Taipei and Australia, who will enter 0-1.

In Group C, Australia (+0.064), Canada (+0.046) and Cuba (-0.102) all finished with a 1-2 record, with Australia having the team-quality balance (TQB) tie-break advantage, which catapulted the Australian National Team into the Super Round.

World No. 5 Cuba, No. 8 Netherlands, No. 9 Venezuela, No. 10 Canada, No. 11 Puerto Rico and No. 12 Dominican Republic have all been eliminated from the global competition.

The higher finisher between Mexico and the USA will qualify for the Tokyo 2020 Olympics as the top team from the Americas.

Either Australia, Chinese Taipei or defending Olympic champions Korea will qualify into the Tokyo 2020 Olympics as the top team from the Asia/Oceania region.

Japan, as the Olympic host nation, and Israel, the winner of the Europe/Africa qualifier, have already qualified into the six-nation 2020 Olympic baseball event.