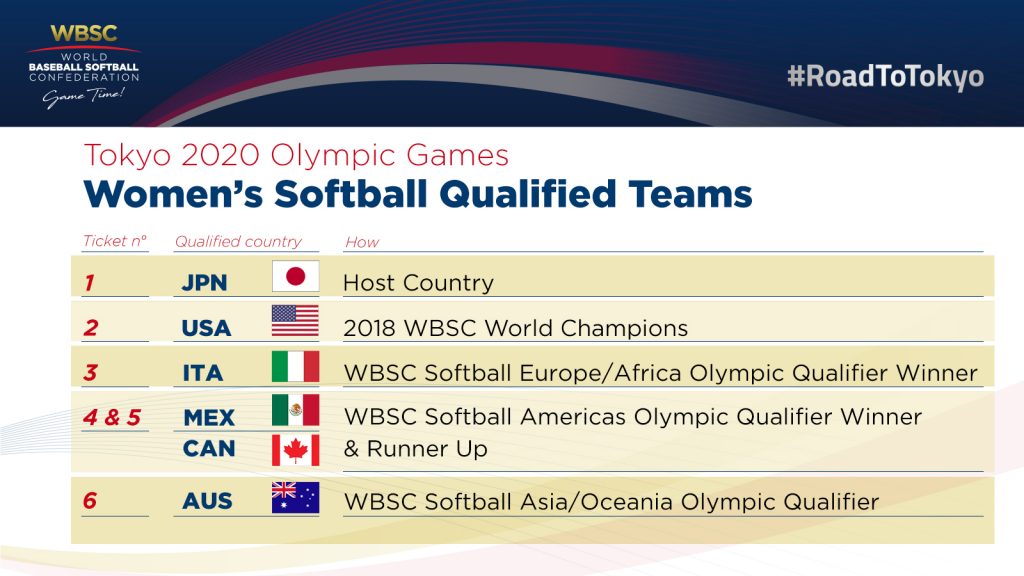 SHANGHAI, China — 29 September 2019 — The Australian Softball National Team earned a place in the Olympic Games Tokyo 2020, defeating host China, 9-3, in the final game of the WBSC Women’s Softball Asia/Oceania Qualification Event for the Games of the XXXII Olympiad Tokyo 2020, and completed the field of teams for Tokyo 2020.

Australia joins host nation Japan; the 2018 WBSC Softball World Champions, USA; the winner of the Europe/Africa Qualifier, Italy; and the top two teams of the Americas Qualifier, Mexico and Canada, to compete in the six-team Tokyo 2020 Olympic softball competition.

It will be the fifth time that Australia will participate in an Olympic softball event, the pinnacle of the sport. Australia has won a softball medal in all the previous four Olympic events.

“Congratulations to the Australian National Team, Softball Australia, and the Australian National Olympic Committee for earning the right to compete in the Olympic softball event at the Tokyo 2020 Games. Finally the world knows the six participating teams in the Olympic softball event, that promise to be the most exciting softball tournament in history,” said WBSC President Riccardo Fraccari. “I want also to congratulate the local organizing committee, who did a great job hosting this tournament.”

Softball will have the honour of kicking off next year’s Olympic Games on 22 July with special opening games at Fukushima Azuma Baseball Stadium.

Two-time Olympic Medallist and Australian National Team Captain, Stacey Porter, said: “I waited for 12 years to return to the Olympics and it is so rewarding to be back at the Tokyo Olympics. It was not an easy path but the girls stuck in there and we worked hard to qualify. They fully deserve the slot.

“Having won a silver at the Athens Olympics and the bronze in Beijing, I am looking forward to the gold medal in Tokyo. It is not going to be easy, but we are determined to emerge tops this time around.

“I may be 38, but I am far from quitting the game. I simply love the game too much. I will be around as long as I can contribute”.