LOS ANGELES – The United States received stellar pitching from Tanner Roark and timely RBI from Andrew McCutchen and Adam Jones and defeated Japan 2-1 to advance to the final of the World Baseball Classic for the first time in its history. Japan’s normally flawless defence twice mishandled balls in the misty conditions, and each proved costly.

Roark and Japan starter Tomoyuki Sugano both pitched very well on a rainy night in Dodger Stadium, and neither team threatened until the fourth inning. Team USA, the visitors in the contest, struck first after Ryosuke Kikuchi misplayed a grounder to second. Christian Yelich raced all the way to second as the ball skipped off Kikuchi’s glove. McCutchen then stroked a two-out single to left to give the U.S. a 1-0 lead.

Roark came out after four scoreless innings and turned things over to the bullpen. After a 1-2-3 fifth by Nate Jones, Kikuchi made up for his error, smacking a home run to centre that tied the game at 1-1.

Both teams had three up, three down sevenths, with Samurai reliever Kodai Senga impressing as he struck out Eric Hosmer, Andrew McCutchen, and Buster Posey. After sending down Giancarlo Stanton on strikes to open the eight, Senga gave up a single to Brandon Crawford, who advanced two bases on an Ian Kinsler double.

Senga induced a soft grounder to third, but Nobuhiro Matsuda struggled to pick it up, losing a chance to nail Crawford at the plate. While the third baseman did nab Adam Jones at first, an accurate throw would have kept the game deadlocked. Senga recovered for a fifth strikeout, but the damage was done.

Japan got the leadoff runner on in the bottom half of the frame after a pinch hit single by Seichi Uchikawa, a career .333 hitter in 17 WBC games, and immediately bunted pinch runner Kosuke Tanaka over. However, for the second time in the game, the strategy did not work, as Andrew Miller and Pat Neshek got out of the jam without the runner advancing, and it was on to the ninth.

Eric Hosmer gave USA a chance for an insurance run after a double off Naoki Miyanashi, but Ryo Akiyoshi retired McCutchen and Posey and United States’ closer Luke Gregerson took the hill. The veteran righthander got three quick outs for his third save of the WBC, and the United States calmly shook hands as they clinched a spot in the final versus Puerto Rico.

“We’ve got a great group of guys on this team who have dedicated this time to be able to try and win some ballgames,” remarked McCutchen after the game. “Everybody’s a superstar on this team. Everybody’s a three-hole hitter. But someone’s going to have to hit seventh, someone’s going to have to hit eighth. There are no egos, even with the pitching.”

“I think that’s what’s made this team get this far on top of being able to play the game the right way,” added USA’s rightfielder. “It’s been really good, been a lot of fun. I’m looking forward to tomorrow.”

Team USA collected on six hits and one walk in the game, striking out 12 times, including four by cleanup hitter Nolan Arenado. However, six U.S. relievers combined for five innings of two-hit, one-run ball and Japan was 0-for-5 with runners in scoring position.

“Well, the team that makes mistakes will lose,” explained Japanese manager Hiroki Kokubo. “I cannot blame them, though, for doing that. Well, I’ve completely exerted my efforts. It’s just the fact of the matter is we could not win.”

Sugano kept Japan close, tossing six innings and surrendering the unearned run on only three hits and a walk. He whiffed six. Senga took the loss despite striking out five in two innings

“Tonight the starting pitcher for Japan, he’s a Big League pitcher. He’s good,” observed Team USA’s manager, Jim Leyland. “I mean, I was really impressed with him. All the teams. We’re playing a great team tomorrow that has the best record so far in the tournament. It doesn’t get easy. Tonight Japan really pitched good, and we pitched just a little bit better.”

Japan will settle for a loss in the semifinals for the second straight Classic, while the United States will take on a second straight undefeated team in Puerto Rico (7-0) for the right to be crowned world champions.

“I don’t set goals. I never did as manager,” remarked Leyland on the finals bid. “The only goal I have is for the team to come every day ready to play and do the best you can. Win or lose, you get beat, you tip your hat to the other team. If you win, you celebrate.” 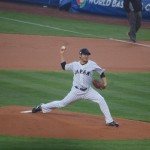 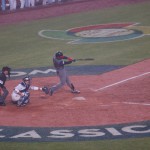 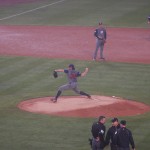 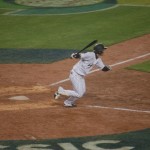 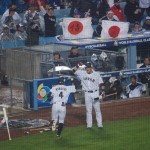 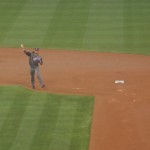 Extra Innings will have complete coverage of the WBC final and all the action on the way to a new world baseball number one. Stay tuned @extrainnings_bb.