LOS ANGELES – Edwin Díaz worked out of a bases loaded jam in the eleventh and Puerto Rico played the tiebreaker rule to perfection as Eddie Rosario broke the hearts of the Netherlands with a game-winning sacrifice fly to send the Caribbean club to the World Baseball Classic championship game. The incredible 4-3 victory would not have been possible without the right arm of Yadier Molina, who threw out two Dutch baserunners in the first inning.

The first WBC semi-final got off to an exciting start as Andrelton Simmons beat out an infield hit to lead off the game, and moved to second after Xander Bogaerts was hit by a pitch. Puerto Rico caught a break, though, when Simmons was picked off and caught stealing as Molina nabbed him with a throw to Carlos Correa at third.

Jurickson Profar followed with a single, but once more, the veteran Molina showed off his outstanding skills, taking the throw from Eddie Rosario in right and pumping it to T.J. Rivera at first. The toss caught a celebrating Profar by surprise, and Rivera applied the tag for out number two.

In the bottom of the opening frame, Francisco Lindor stroked a one-out double, pumping his fists to work up the raucous Puerto Rican crowd. Moments later, Carlos Correa gave the fans even more reason to cheer as he crushed a game-tying roundtripper that travelled an estimated 441 feet. Dutch starter Rick van den Hurk gave up a single to Carlos Beltrán, but managed to escape the inning without any more damage as Bogaerts and Jonathan Schoop teamed up for a nifty twin killing.

Jorge López tossed a scoreless second, and Puerto Rico got off to a good start in the second on a Javier Báez single, but van den Hurk induced a grounder that Simmons handled for a double play. The fielding gem saved a big run for the Netherlands as Rivera followed with a home run that turned out to only be a solo shot.

In a game that featured only two 1-2-3 innings, both teams had plenty of chances in the intervening innings, but outstanding defence kept the score at 3-2 until the fifth. In the inning, Balentien ripped a double for a record-setting 16th hit in a single Classic, and came round to score on a Shawn Zarraga two-bagger.

The Netherlands would have scored a second run were it not for the combination of Báez and Molina.
After Balentien’s hit, Schoop was walked intentionally and, as he raced home for the would be go-ahead run, Báez took a great throw from leftfielder Ángel Pagán and fed it perfectly to Molina, who blocked the plate to prevent Schoop from tagging home.

Superb long relief from Jair Jurrjens and Shairon Martis kept the Netherlands in the close game, while Héctor Santiago once more threw steady middle innings for Puerto Rico. Joseph Cólon and Álex Claudio combined to toss scoreless ball from the seventh to the ninth innings, benefitting from three double plays.

Dodgers’ closer Kenley Jensen pitched a scoreless bottom of the ninth for the Netherlands, striking out two, and it was on to extra innings to decide the first team to appear in the WBC championship.

Puerto Rico closer Edwin Díaz continued his dominant run through the Classic, striking out Profar, Balentien, and Schoop back-to-back-to-back in the tenth. It was the only time Balentien failed to reach base in the game. A former Japanese home run champ, Balentien was 3-for-4 in the game and leads the Classic in hitting at .616.

Jansen asked the Dodgers to allow him to pitch the tenth and was denied, so Loek van Mil came out of the bullpen for the bottom of the tenth, and faced only three batters thanks to a Simmons to Schoop twin killing.

The Classic uses international tiebreaker rules that place runners on first and second from the eleventh inning onward, and Netherlands’ manager Hensley Meulens opted to bunt them over, which prompted an intentional walk to load the bases. With one down, Díaz had a tall task, but on the first pitch to Curt Smith, the flamethrower induced a bouncer to second that Báez wrapped up and flipped to Lindor, who fired it to first for a crucial double play.

Van Mil stayed on the hill for the latter half of the eleventh, and Edwin Rodríguez took the same approach as Meulens, asking Molina to bunt the runners over. Javier Báez was then walked to jam the sacks. The move worked to perfection, as Eddie Rosario lifted a fly ball to centre, and Profar, normally an infielder, fired a ball off the mark as Carlos Correa scored the winning run.

Correa touched home and immediately led a charge to first base, where the entire team surrounded Rosario in a moving huddle, celebrating all the way into right field as the Netherlands trudged off the field heartbroken. The scene echoed the 2013 Classic semi-final, where four years ago, almost to the date, the Dutch squad were eliminated in San Francisco by eventual champions Dominican Republic. 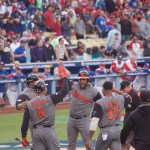 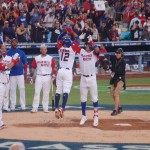 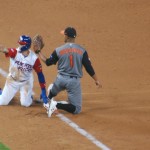 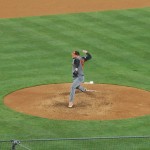 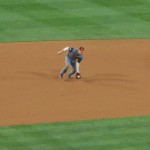 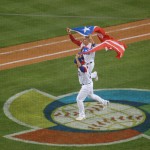 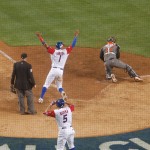 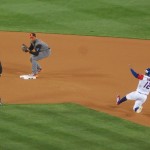 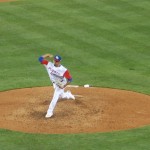 “Well, it’s always difficult to lose a game like this where we had opportunities, especially in the first inning when we had two runners that got out,” remarked Meulens. “The pitching was very good, our pitching. They played great. They had tremendous defense, and we learned that we have the team to compete at this level. Now we will be back in four years.”

“Those two base running blunders cost us more runs in that first inning,” continued the Netherlands’ manager. “That could have been the difference in us winning or not. They’re the strongest team we’ve faced in the tournament.”

The Netherlands collected 11 hits and six walks in the game compared to Puerto Rico’s 12 hits and two walks. Neither team was guilty of an error. The Dutch left 10 men on base and committed three baserunning errors, all of which cost the team runs. Balentien scored two of the team’s runs and had three of its hits, while Simmons had the only other multi-hit game.

The Dutch bullpen was exceptional, firing 8 1/3 innings without surrendering an earned run (tiebreaker runs are considered unearned). Jurrjens got seven of those outs, while Tom Stuifbergen struck out two batters of the six he retired. Rodríguez’ relievers were nearly as good, totalling 8 1/3 frames as well, with only a single run plated. Díaz was credited with the well-deserved win.

“Well, it was so far, I think, if not the best, I haven’t seen every game of the tournament, but this game, it was a great game,” remarked Rodríguez. “It was very well played, both sides. And the defense and execution won the game today.”

“It was very important for us to be able to bring the fundamentals of baseball. That’s what got us the win today,” added Puerto Rico’s manager. “We bunted the ball well. We pitched to contact. We made contact with runner on third, less than two outs. So although we’ve been pretty much overpowering everybody throughout the series, throughout the tournament, today we played very good fundamental baseball, and that’s what got us the win.”

Lindor had three safeties for the victors, while fellow youngsters Correa and Báez each had a hitting brace. Báez was involved in three double plays, while Lindor turned two. Báez also swiped third, the third time he has done so in the WBC.

“Tonight [our young players] graduated,” concluded Rodríguez. “Tonight they do deserve to go where we’re headed, which is the final game. Because they handled the basic fundamentals from baseball.”

The Netherlands will settle for a disappointing semi-final exit for the second WBC in-a-row, though the powerful club left no doubt that European nations can play world championship quality baseball. Puerto Rico, on the other hand, will have another chance at a world title after falling to the Dominican Republic in the final game of 2013. On Wednesday, they will face the winner of Japan and the United States, who play tomorrow (March 21) at 6 p.m. PDT (2 a.m. GMT). The title game will start at the same time, and Extra Innings will have live coverage of both, plus quotes from players and analysis of the game @extrainnings_bb.