SAN DIEGO, Calif. – Adam Jones and Eric Hosmer both knocked balls out of Petco Park in the eighth inning, and Team USA came-from-behind to defeat Venezuela, 4-2 in the Second Round of the World Baseball Classic.

Venezuela and the United States were locked in a pitching duel until the late innings, as Drew Smyly and Félix Hernández each flashed their best stuff. In the first five innings, only the third ended with any action, as Venezuela took the lead 1-0.

Carlos González started with a single up-the-middle and went to third after Robinsón Chiriños beat out a bunt, moving to second as Smyly threw the ball away. A sacrifice fly by Ender Inciarte plated Chiriños. In the bottom of the frame, USA loaded the bases, but Hernández got Adam Jones to ground into a double play to end the jam.

Smyly exited with two outs in the fifth to a standing ovation. Before coming out of the game, he had struck out the previous six batters in-a-row, almost certainly a World Baseball Classic record. On the day, the left-hander’s eight strikeouts set a USA record for most in a WBC game.

Hernández finished out the fifth, like Smyly needing only just over 60 pitches. The Mariners’ ace gave up three hits and no walks, striking out three, sorting out the command problems that plagued him in his start versus Puerto Rico.

Several players hit long flies in the early going, but Petco Park’s notoriously forgiving dimensions prevented anything from sailing out. Andrew McCutchen had two balls caught at the warning track, as did Nolan Arenado, but it was Venezuela’s Rougned Odor who finally put one out, ripping a 403-footer to right field in the seventh.

With both bullpens flashing great stuff, the 2-0 lead seemed insurmountable at the time, but the U.S. lineup set to work in the bottom of the frame. Hosmer singled to start off the inning, with Paul Goldschmidt beating out an infield single to put two on. McCutchen almost gave USA the lead, but Carlos González caught the fly with his back at the wall. Jonathan Lucroy picked up the team, though, lifting a ball to almost exactly the same spot that scored Hosmer, who had moved over on the near miss.

Arcenio León got a big groundball to get Venezuela out of the jam with the lead, but the visitors could not add an insurance run in the eighth, and the Americans took the lead in a big way in the latter half of the inning.

Adam Jones greeted Héctor Rondón with a massive blow to centre that kept carried and tied the game for Team USA. Christian Yelich followed with a single and, a batter later, Eric Hosmer crushed a fastball from Rondón over the right field fence for the game-winning home run.

The U.S. had the chance for more, loading the bases with two outs, but Bruce Rondón, unrelated to his same-named teammate, struck out Ian Kinsler to end the threat. Luke Gregerson then closed out the game for a save, and the United States got a vital win in Pool F play.

After the game I told Jones that the title ‘Captain America’ is starting to be applied to him and asked how he felt about taking the name off David Wright. 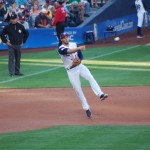 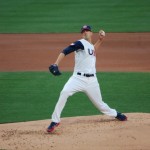 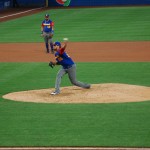 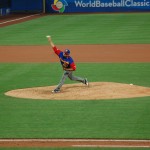 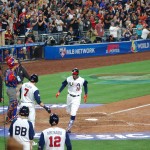 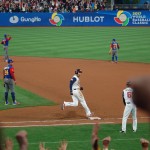 “I don’t mind it one bit. I’m the leader of the Orioles, and I don’t mind being the leader of this team,” explained Jones. “We have plenty of players who are leaders on their respective teams. The beauty of this tournament is you come together with a bunch of great guys. We all have our own niches and things that we add to the game. I just add intensity, passion, and the guys feed off me.”

Alex Bregman and Hosmer each had a pair of hits in the contest, and afterwards talked about how much wearing the Stars and Stripes means to them.

“I think that we have a great team her, a lot of good players, and we’re playing for our country,” commented Bregman. “It’s something bigger than baseball. Hopefully it will continue to grow and get more people watching.”

“It is special, it really is. That’s what’s so fun about this tournament [hearing ‘USA! USA’],” remarked Hosmer. “Baseball is America’s pastime, so we really feel the will and the want to bring it home and put America on top of the baseball world.”

USA will get a chance to continue its quest to do just that against Puerto Rico on Friday at 7 p.m. PDT (3 a.m. Saturday GMT) at Petco Park. In major tournaments since 2000, the U.S. is 7-4 against its territory, but lost the last two meetings in the 2015 Pan-American Games and the 2013 WBC. Venezuela will play the Dominican Republic tomorrow at the same 7 p.m. slot. The loser will likely face elimination, while the winner could battle back to advance. Extra Innings UK will have all live news, photos, and analysis @extrainnings_bb.