IRVINE, California, USA. USA earned the WBSC U-19 Women’s Softball World Cup for the third time in a row with a come from behind, walk off win over Japan, 4-3, in the bottom of the eighth inning. USA is the first nation ever to complete the three-peat in this age category.

With Japan leading 3-0 after the top of the eighth, pinch hitter Francesca Hammoude tied it on a home run. Charla Echols followed with a two-out stand up triple and scored the World Championship run on a slow roller by Jasmine Freed.

WBSC Chairman Tommy Velazquez said: “Congratulations USA for becoming World Champions, and to all 16 teams who made this World Cup exciting and memorable. For the last 8 days, these young stars have represented the excellence and excitement of this pinnacle event, battling For the Title of World Champion.

“I want to express my recognition to the Local Organizing Committee and USA Softball Southern California, for its commitment and efforts to organize a world-class tournament”.

After the game, USA head coach Heather Tarr praised her players: “We are tough and resilient. We knew it was tough to overcome a three-run deficit against a pitcher who hadn’t allowed an earned run in the tournament, but we still knew we could do.”

Japan’s head coach Yosuke Sato spoke through an interpreter. “I believe this tournament will prove a very good experience for us and that will help us improve for the next time”

In the Bronze Medal Game, Canada beat Australia by a score of 5-4.

All 62 games of the WBSC U-19 Women’s Softball World Cup were broadcast through the WBSC OTT platform, Game Time.

It was the last WBSC U-19 Women’s Softball World Championship. Starting next year, the age bracket will change from U-19 to U-18. 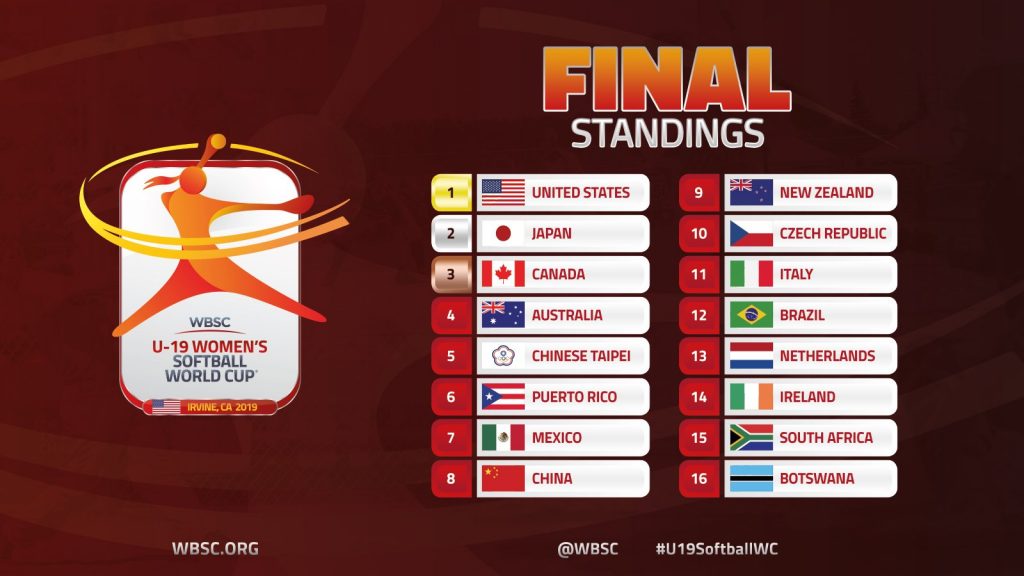