by Swedish Baseball and Softball Federation 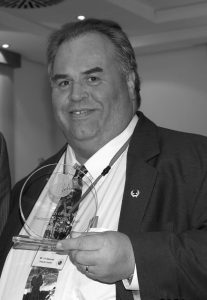 Last Thursday, June 4, Ulf Steinvall passed away at the age of 60. He died in his home in Kristianstad, Sweden, after a period of illness. He leaves behind Mrs. Joy Steinvall.

Ulf started his athletic career in the birthplace of Skellefteå where he worked for AIK in ice hockey and then became a successful leader for Skellefteå BSK with a large number of Swedish Championship gold in baseball as a heavy merit.

He began his work for Swedish Baseball- and Softball Federation (SBSF) early and was a member of the Board during the period 1992-2012. For many years he was chairman of the baseball committee and a legendary team leader for the senior national team in baseball.

After completing his 20-year term on the Board, he was chairman of the nomination committee for two years and then a member of the legal committee until his death. The most recent assignment was to hand out the prizes in the baseball finals on August 31, 2019.

He represented the federation at a number of congresses in the international federations.

I got to know Ulf during the second half of the 1990s when I came back to federation work after a break and I came to appreciate his energy and knowledge of the sports world. There were baseball and softball, ice hockey in Skellefteå and American football in the Rams that buzzed in our conversations.

Later, Ulf became my Deputy Chairman of the Federal Board responsible for national team activities, a position he handled in an excellent manner. Several were the international tournaments that Ulf helped Sweden got to organize and several were the ones where Ulf acted as team leader for the baseball team.

Ulf always created a pleasant atmosphere at the gatherings and with his work he helped ensure that our sports are treated with respect both in Sweden and abroad. It was a great pleasure to work with Ulf and it is with great sadness and missing that I realize that Ulf is not among us anymore.

Ulf recruited me to the then Baseball Committee at the end of the 1990s, where he organized almost all of the Swedish baseball operations, from juniors to national teams. He had a natural ability to delegate responsibility and make us feel secure in our roles. We were later followed in other key roles within the federation until his departure from the board in 2012.

I also had the privilege of being with him around the A-national team on a number of occasions, and it was clearly evident what a wonderful energy he spread around him among both players and leaders. He really cared about the players, gave everything to them in all situations, and it was noticeable in the mood of the team he was the coach of.

I got to know Ulf in the late 90’s, then as chairman of Rättvik BSK and he as national team manager for the senior team in baseball. We were not always in agreement at that time, but our discussions were always calm, factual and most of the time we agreed before we ended our discussion.

Later, we came to be followed in the federation, in different roles but always with good contact between us.

It was also Ulf, then in the role of chairman of the nomination committee, who “persuaded” me to take up the challenge of taking over the chair of the SBSF after Mats Fransson.

After Ulf withdrew from the baseball I kept good contact with him. He always wanted reports on what happened in SBSF.

As late as 2018, SBSF awarded Ulf a gold medal for his services, something that I know he appreciated a lot and I am today happy that we were able to give him that award.

I will remember Ulf for all the stories he always had in readiness or practical jokes we would receive if we did not do as he wished, always with the blink of an eye of course.

SBSF has lost a great profile, a committed leader and a good friend.