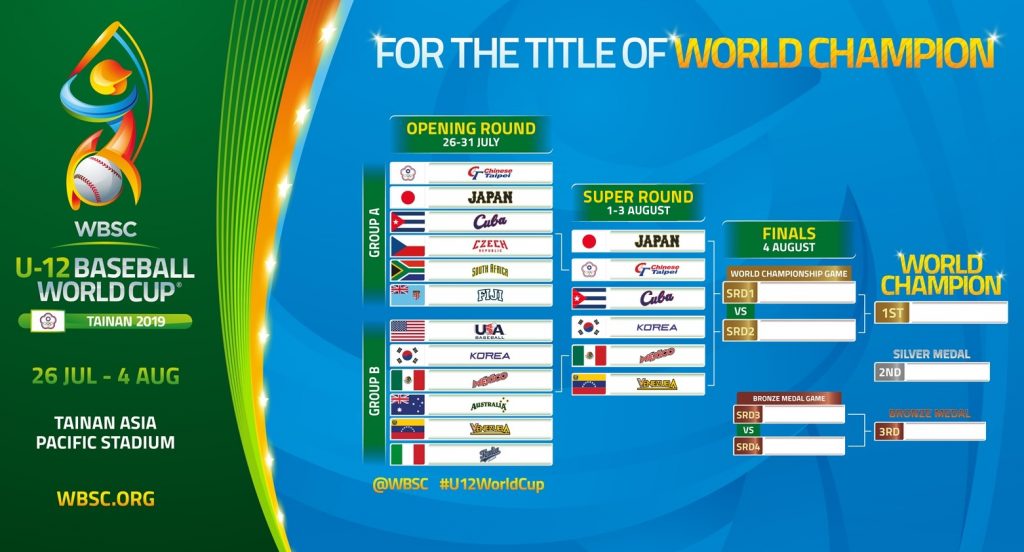 Tainan (TPE) — 30 July 2019 — Starting with 34 nations in the continental qualifiers, the WBSC U-12 Baseball World Cup 2019 in Tainan is now down to just six teams, with world No. 1 Japan, No. 4 Chinese Taipei and No. 5 Cuba out of Group A and No. 3 Korea, No. 6 Mexico and No. 9 Venezuela out of Group B still in contention to be crowned baseball’s new world champions in the Under-12 category.

Three-time defending U-12 World Champions USA were eliminated in the opening round in Tainan, following one-run losses to Americas rivals Mexico and Venezuela in Group B. Australia, Czech Republic, Fiji, Italy, South Africa and USA will all continue to compete in the 7th-12th Place Round.

Following the exciting play in Tainan, the World Baseball Softball Confederation today unveiled the Super Round schedule, with all nine games to take place at the main venue of the new $130 million Tainan Asia-Pacific International Baseball Stadiums, the Official Stadium of the WBSC U-12 Baseball World Cup.

Super Round (All times local)

As undefeated group-winners of the opening round, Japan and Korea will carry records of 2-0 into the Super Round. Chinese Taipei and Mexico will enter with 1-1 records, while Cuba and Venezuela will enter 0-2. Opening Round wins/losses against eliminated teams are withdrawn to start the Super Round.

The two teams with the best records following the Super Round will play For the Title of World Champion in Sunday’s Final at 6:30 pm.

NOTE: Korea and USA will make up their 28-July game, which was postponed due to rain, tomorrow (Wednesday, 31 July) at 10:00 am at ASPAC Stadium, which will officially conclude the opening round.

All nine games of the Super Round will be live-streamed (subject to geo-blocking) at the WBSC’s new OTT platform at https://gametime.sport and the official WBSC YouTube channel at www.youtube.com/wbsc.

For full event coverage, including news, live play-by-play, stats and standings, visit the official website of the U-12 Baseball World Cup at u12bwc.wbsc.org.