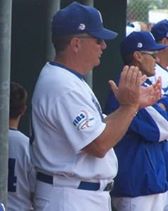 European Baseball mourns the death of Bill Holmberg, who died due to pancreatic cancer at the age of 67. His illness was publicized at the end of September, when his son started a crowdfunding page to help his father’s treatment. It raised quickly more than 48,000 USD. However in the end Bill Holmberg lost the cancer fight.

Bill Holmberg was born in Chicago in 1953 and raised in Florida. As a catcher he played baseball at Florida State University. In 1976 he moved to Italy to play in the Serie A2 and later became player-manager of Godo. After a stint as coach in the United States he returned to Italy in 1989. He later became head coach of the Italian U18 National Team and also served in various roles on the Italian Senior National Team coaching staff.

Bill Holmberg didn’t stop there and was instrumental in the development of many European baseball players in his role for Major League Baseball development. He was a beloved speaker at various coaching clinics throughout Europe. In 2015 he earned the lifetime achievement award from the European Baseball Coaches Association.