In the Italian Serie A1 Baseball week two of the 2019 season was played this past weekend. On Friday San Marino Baseball edged out Parmaclima with a 4-3 win in ten innings. A sac fly by Federico Celli in the bottom of the tenth lifted San Marino to the win. Sebastiano Poma and Alex Sambucci had homered for Parma. Owen Ozanich pitched five scoreless innings in relief. Fernando Baez picked up the win, Marc-Andre Habeck took the loss. On Saturday Parmaclima rebounded with a 6-4 win to earn the split in the two-game series. Mattia Aldegheri pitched five scoreless innings for the win. Alessandro Maestri got charged with the loss.

Sipro Nettuno Baseball City defeated Godo Baseball in both ends of a doubleheader, thanks to a pair of 6-3 wins. In game one in the afternoon Nettuno scored three runs in the eighth to break a 3-3 tie en route to the win. Luis Alvarez and Leomart Rodriguez had a pair of solo home runs. Freddy Noguera drove in three. In the evening game Ricardo Hernandez threw four scoreless innings of one-hit relief to lead Nettuno to the win. Nicola Garbella provided the solo home run for Nettuno, Alfonso Reda went deep for Godo.

Unipol Bologna swept the Rangers Redipuglia in the third matchup this week in the Serie A1. In game one Bologna needed a walk-off RBI double by Alessandro Vaglio in the bottom of the ninth to edge out Redipuglia 3-2. Alex Bassani picked up the win, Omar Polo took the loss. In the second game Bologna prevailed 8-5. Raul Rivero struck out ten in five innings, but ended up with the no-decision, as Antonio Noguera blew the lead in the sixth. Bologna answered right away and he got awarded with the win. Eduard Pirvu took the loss, conceding nine hits, six runs (5 ER) and a walk in 5 1/3 innings. Renzo Martini and Alessandro Deotto went deep for the Rangers. Vaglio, Alexander Rodriguez and Alessandro Grimaudo had home runs for Fortitudo. 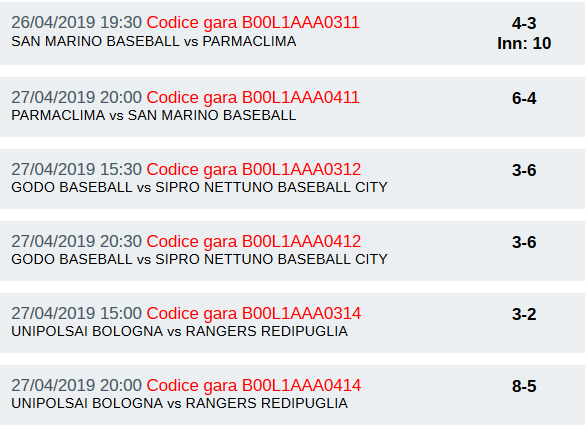