The 2019 season in the Italian Serie A1 started this weekend with six games. Unipol Bologna, Sipro Nettuno Baseball and Parmaclima all celebrated two wins on opening weekend.

Bologna edged out San Marino Baseball. On Friday Bologna scored three runs in the seventh without recording a hit to prevail 5-4 in the game. On Saturday Unipol scored two runs in the first on their way to a 3-1 win. Raul Rivero struck out eight in five scoreless four-hit innings.

Sipro Nettuno Baseball had Raul Ruiz and Ricardo Hernandez combining for nine solid innings in a 7-1 win over Autovia Castenaso on Friday. Giuseppe Mazzanti hit a home run. The second game on Saturday turned out to be a slugfest with Nettuno winning 18-12. They scored nine runs in the seventh to get ahead of good in a close contest. Paolino Ambrosino had four hits, a home run and four RBI for Castenaso. Oscar Angulo topped him by going 5-for-6 with a double shy of the cycle, four runs scored and four RBI.

Parmaclima rode their French connection on the mound, Owen Ozanich and Marc-Andre Habeck to a 12-2 win over Godo on Friday. Segundo Paolini went deep and drove in six. On Saturday Mattia Mercuri hit a three-run home run as part of a four-run first on their way to a 7-2 victory for Parma. 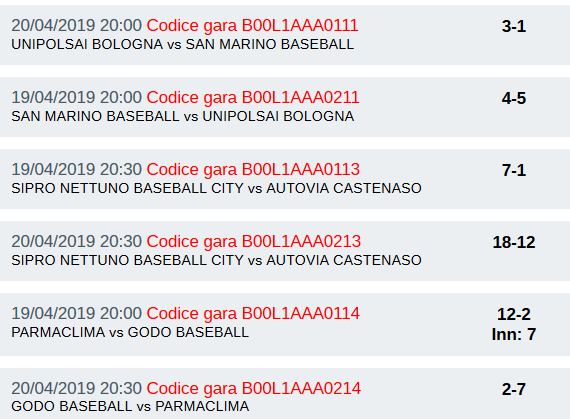