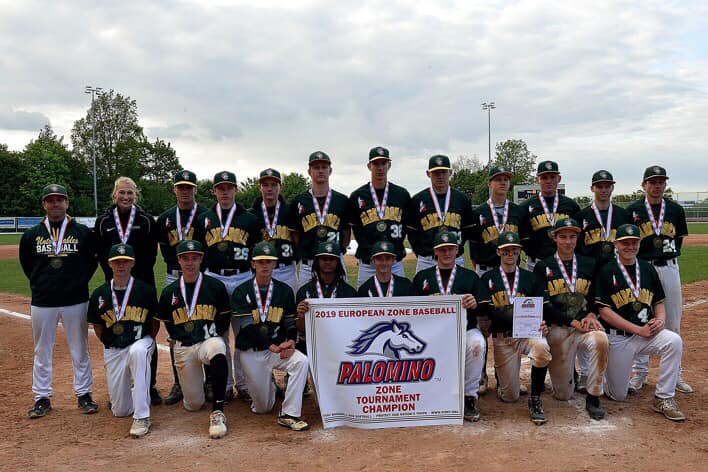 After rain cancelled three of Saturday’s games at the Palomino European Zone Championships in Stuttgart, Germany, four teams had title hopes on their minds heading into the morning’s semifinal bouts. Paderborn, Germany held off a rallying Belgium National Team and walked the game off in a 6-5 win in the day’s first semifinal. In the second, Netherlands United scored early and often to boat race and then contain the previously undefeated Stuttgart Reds in a 12-7 win in five innings. In the championship game, Paderborn’s four-run top of the sixth inning propelled it to victory 7-4 over Netherlands. As the PONY European Zone Champion, Paderborn received the Zone’s automatic bid to the Palomino World Series Aug. 2-5 in Laredo, Texas and will represent the Zone in its first-ever appearance.

Yannic Walther’s walk off double advanced the Paderborn Untouchables to the championship game, as the Germans defeated the Belgium National Team 6-5. Paderborn led 5-1 going into the top of the fifth inning, when Belgium went on a four run rally that proved to be pivotal because of the tournament’s two-hour time limit. Quentin Devreese was the first of three-consecutive Belgian hitters to record RBI singles, followed by Luca Pignatelli and Tomasz Silva. Pignatelli then scored on an error, completing the scoring for the inning (5-5). Paderborn had the chance to end the game in the bottom of the fifth with Leon Sondersorg on third with one out, but a strike out and fly out sent the game into the sixth. Both teams advanced runners to third base, but neither could come through, as a strike out ended Belgium’s inning and a double play ended Paderborn’s inning. Belgium’s Arthur Heymans was caught stealing at third base with just one out in the top of the seventh, and a strikeout ended the squad’s hopes for a lead. International tie breaker rules place runners on first and second to begin the inning. After seeing a pitch, Walther launched his double and the Germans walked off victorious. Paderborn’s Patrick Harrison was solid on the mound over the game’s final three innings. He didn’t allow a hit and walked two, while striking out five for the win. Offensively, for Belgium, Heymans and Silva tied for the team lead with two hits apiece. For Germany, Luca Rammelmann and Max Eckermann paced the offense with two hits and two RBI each, as the team stayed undefeated.

An eight-run top of the first inning gave Netherlands United an early lead that it never relinquished to the previously undefeated Stuttgart Reds, as the Dutch won 12-7 and advanced to the championship game against Paderborn. Netherlands recorded six hits and took advantage of two Stuttgart walks and an error to score eight runs in the top of the first. Mitchel Colina, Aidan Brodsjo, Sydney Hoeverts and Lucas Erkeland all contributed with RBI singles in the inning. The Dutch added to their lead in the top of the third, when Lucca Van Der School singled home Erkeland, and then Colina singled home Boris De Voos. Brodsjo later hit an RBI single that scored Van Der Schouw, completing the scoring for the inning. Once again, Netherlands commanded the game’s momentum and increased the team’s lead in the top of the fourth. Erkeland doubled with two outs, and De Boos reached on an error that allowed Erkeland to score (12-0). Netherlands’ Aloys Burger was pulled in the top of the fourth, after allowing a double to Moritz van Bergen, who later scored on Jerome Noso’s single. Prior to that, he’d kept the German bats at bay, giving up just a single and a walk, while recording a strikeout. Stuttgart cut the deficit in the bottom of the fourth, when it scored six runs, and the team made it a respectable game when it scored again in the bottom of the fifth, when Linus Hundt singled home Amando Dossow. Unfortunately for the Germans, a ground out with two runners in scoring position ended the game and Stuttgart’s title hopes. Van der Schouw had a game-high three RBI for Netherlands, while Erkeland was sensational, going 4-for-4 with two doubles and three runs scored. For Stuttgart, van Bergen and Noso led the team with two hits each.

Livio Bundi was magnificent on the mound for the Swiss National team, going 5.2 innings, allowing one unearned run on three hits and three walks, while striking out 10, in a 6-1 victory over the Polish National Team to finish in fifth place in the tournament. Bundi also tied for the team-high with two hits, alongside Michael Diaz and Yannic Sutter. Switzerland scored two runs on Polish errors and one run on a wild pitch in the contest. Emil Dudek picked up two of Poland’s three hits in the game.

With the game tied at three, a four-run top of the sixth inning was the turning point for the Paderborn Untouchables in their championship game victory over Netherlands United 7-4. With runners on the corners and one out, Merlin Bendlin came through with the hit of the game, when he doubled, scoring Leon Sondersorg and Florian Herwig. Lucas Erkeland came in to replace Obed Hernandez on the mound, but he allowed Zan Primozic to single and Bendlin scored on a Dutch error. After a fly out, Luca Rammelmann reached on the third of three errors in the inning for the Netherlands, and Primozic scored (7-3). Netherlands retaliated with a run of their own in the bottom of the sixth, when Boris De Voos hit into a fielder’s choice that allowed Kylian Mok to score. After Paderborn went down 1-2-3 in the top of the seventh, Luca Kloppenburg closed out the game for the win, when he induced a ground out, strike out and fly out to end the game 7-4. Yannic Walther, Rammelmann and Sondersong all tied for the team lead with two hits each for Paderborn. Bendlin had a team-high two RBI. Van der Schouw paced the Dutch with two hits. As the European Zone Champion, Paderborn earned the Zone’s automatic bid to the Palomino World Series Aug. 2-5 in Laredo, Texas. Paderborn will represent the PONY European Zone in its first-ever appearance in the Palomino World Series.