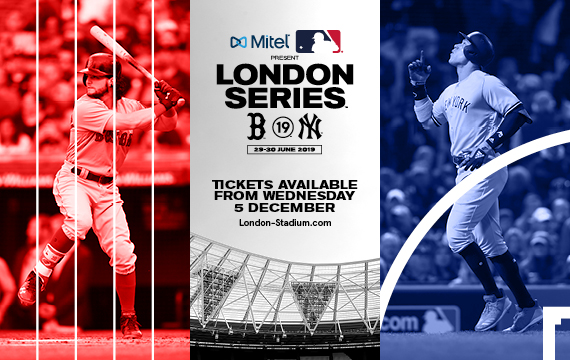 For the first time in history Major League Baseball is going to play a pair of regular season games in Europe this coming weekend. London, UK will host a two-game set between the New York Yankees and Boston Red Sox and London Stadium, the site of the 2012 Summer Olympics.

Major League Baseball transformed the current home of West Ham United with a dirt-infield and artificial turf in the outfield into a baseball playing field during the last two weeks. Distances in the outfield will be shallow, while foul territory will be huge.

Game one is scheduled for Saturday evening at 6pm local time on Saturday and 3pm local time on Sunday. The gates open four hours before first pitch. Both teams received off days prior and after the London Series to accommodate for the flight from the east coast in the Untied States to London.

In 2020 London will host a two-game series between the Chicago Cubs and St. Louis Cardinals as Major League Baseball returns in mid-June.