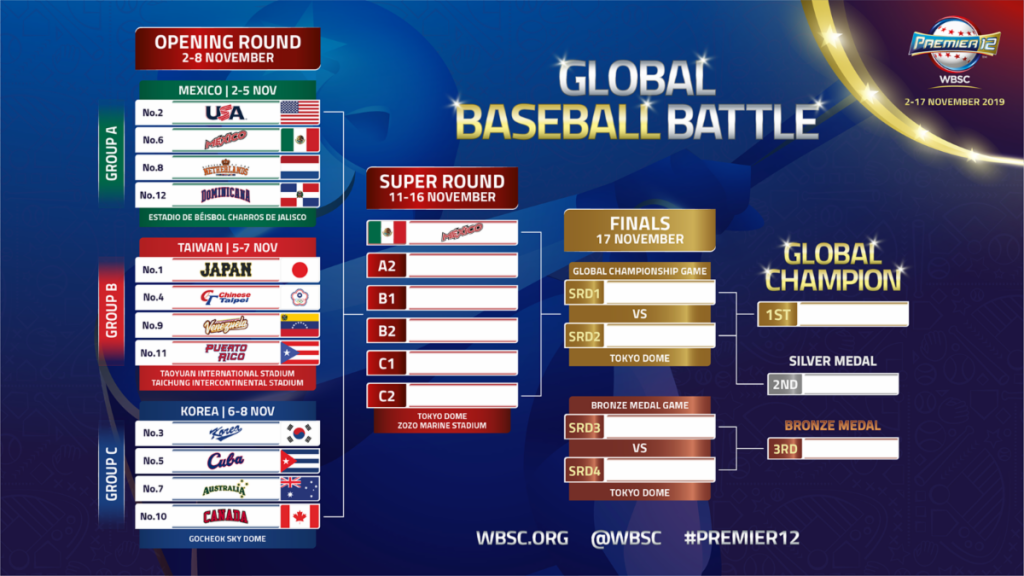 GUADALAJARA, Mexico — 04 November 2019 — The Mexican National Baseball Team qualified for the Tokyo Super Round of the 2019 World Baseball Softball Confederation (WBSC) Premier12®, after having clinched first place in Group A Sunday night at Estadio de Charros in Guadalajara, Mexico.

In front of the home crowd, current world No. 6 Mexico defeated No. 2 USA, 8-2, and hold any tiebreaker advantage after victories over the US and No. 12 Dominican Republic heading into the final day (Day 3) of the Group A round robin.

The Dominican Republic (1-1) and the US (1-1) will meet on Monday in a knockout match, with the winner advancing to the Tokyo Super Round and the loser eliminated from the global competition.

Taichung Group B set to open on Tuesday

Group B of the 2019 Premier12 is set to open on Tuesday at Taoyuan International Baseball Stadium and Taichung Intercontinental Stadium in Taiwan, as no. 1 ranked Japan match up with no. 9 ranked Venezuela.

Host and world No. 4 Chinese Taipei will begin their Premier12 campaign at Taichung Intercontinental Baseball Stadium against world no. 11 Puerto Rico.

Group C at the Gocheok Sky Dome in Seoul, Korea, will open on Wednesday, 6 November, and feature a battle between host Korea — the defending Olympic and Premier12 champions — and No. 5 Cuba, No. 7 Australia and No. 10 Canada.