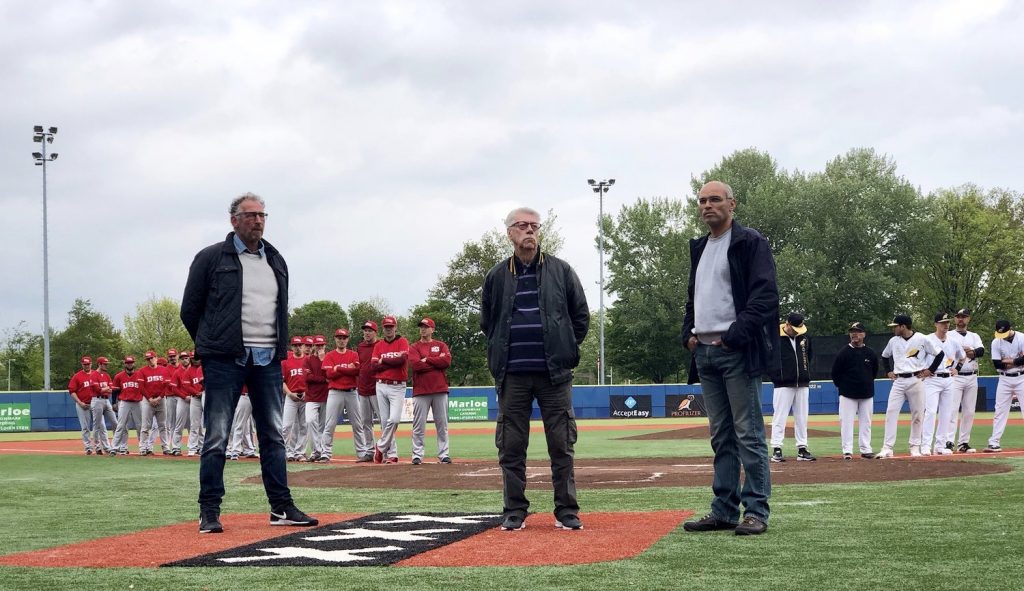 Before their first home game in Hoofdklasse season 2018, L&D Amsterdam Pirates in an opening ceremony at sports parc Ookmeer-West yesterday announced that #5, #19 and #35 have been retired officially in respect for their former players Ronald Stoovelaar (5), Rikkert Faneyte (19) and Peter van Erk (35). All three originated from real baseball families and started to play as RAP and Pirates club member at a very young age and reached Hoofdklasse level. Van Erk played 233 official games in 8 seasons (1982-1989) and Stoovelaar 500 games in 14 seasons (1982-1994 and 1998). Catcher Stoovelaar also made it to Netherlands national team, for which he played in 72 games, including three World Cups tournaments and one Olympic Games tournament: Seoul 1988.

Rikkert Faneyte however played for Pirates in scattered Hoofdklasse seasons: first from 1985 thru 1991, then from 1998 thru 2001 and at last in 2005and 2006. During these 11-plus seasons he collected 412 games as outfielder and pitcher for Pirates. For Netherlands national team he played in 87 games, including two World Cup tournaments and two Olympic Games tournaments: Seoul 1988 and Sydney 2000. Faneyte made history in 2000 Olympics by picking up the save versus Cuba, which had an unbeaten record in all previous Olympic Games. Stunning his opponents and international audience in Sydney, he was called to the mound coming in from outfield position. Faneyte secured the 4-2 lead for his team and delivered multi-champion Cuba their first ever loss in Olympic history.

At the age of 21 Faneyte as a Dutch amateur was drafted by San Francisco Giants on 4 June 1990. As second Dutch skilled player ever he debuted in Major League on 29 August 1993. As a Giants player he collected 72 games in 3 Major League seasons: 1993-1994-1995. In 1996 he played another 8 Major League games for Texas Rangers. His entire Major League career comprised 80 games and 264.1 innings for a fielding percentage of .976, a batting average of .174 and an on base percentage of .264. When back in the Netherlands he immediately rejoined his club Pirates in Amsterdam and the national team selection of the Netherlands. As Pirates manager he clinched national championships in 2008. With player Faneyte, Netherlands became European champion 1987 and 1999.