In tough times for the Ukraine, despite all the difficulties which the Ukrainian nation is experiencing and the complete lack of funding for teams and leagues, the Kiev Baseball League started into its second year in a row – Kiev baseball Championship among adults. And after Kiev had 4 teams in 2013, in 2014 at the start of the championship teams there are 7: Almaz, Alligators, Angels, Telbin Bandits, Legionaries, Shmely and Yayabaten.

All the team’s help each other, share equipment, uniforms. They conduct common training because only together we can solve all the difficulties both, as in sport, as in life.

The Kiev Baseball League in 2014 consists of 42 games, which will be held on Saturdays from May to August. All the games are scheduled for a new baseball field in the center of the city on the banks of the Dnieper River. On the first day of the tournament almost all the teams went into the season with new uniforms and extended rosters, with goals to win the Championship in Kiev, and the most basic dream that in Ukraine will be peace.

All information on the Kiev Championship Series is available at www.kievbaseball.com.ua 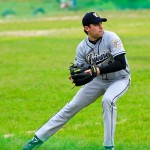 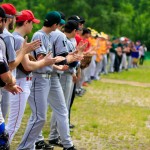