The Swedish Baseball and Softball Federation held their Annual Meeting on the weekend of April 4-6 in Nyköping.

With a historical setting and with several events held at the Medieval Nyköping Castle, the Annual Meeting was a memorable one, hosted in perfect fashion by the volunteers of Arnö IF and Nyköping Baseball, and led by Peter Strom in the LOC. The financial report for 2012 was reviewed, as were the audit and annual report. The budget for 2013 was approved, as the action plan for the coming five-year period.

Mats Fransson, who has served the SBSF as President for the last 12 years, had announced his withdrawal from the board, instead focusing on his task in the CEB Executive for the coming four-year period. Mats Fransson has served Swedish baseball and softball in an excellent way since the first time he was elected on the board, in 1977 (35 years ago) and was appropriately honoured for his work for the federation during the Annual Meeting.

In his place, former manager of competitions, Johnny Stormats, was unanimously elected as new SBSF President for the coming year.

Returning on the board for another two-year term was Lars Sundin, Jenny Wonisch, and Krister Smedberg.

The remaining board members, Maria Jönsson, Berit Johannessen, and Karl Knutsson, each has one year left on their mandate.

After the annual meeting, the official dinner was held in a memorable way.

The delegates were treated to a traditional medieval banquet or “gästabud”, anchored by the Court Jester, played in an excellent way by Lasse Lindberg. The medieval banquet was complete with songs, jokes, medieval food, kings, queens, and lots of other happenings during the evening, which was ended with live music well into the night. 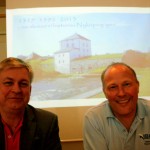 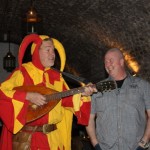 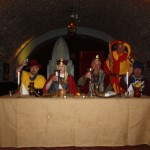