Jason Holowaty started by thanking the Dutch federation and local organisation to invite him to participate in the opening ceremony of the new baseball stadium and other fields of the ball park. He said that the new Major League facility here is to set the standard in Europe. The wonderful ball park is a new stap in his game development program as MLB representative for the continent. MLB is already planning and preparing baseball camps in Hoofddorp and additionally they are trying to hold a fall tournament for national academy selections from various countries, like Germany, Italy and Canada.

Robert Eenhoorn continued by underlining that no other baseball facility in Europe can compete with the specifications of the new Hoofddorp stadium and with its parts, such as the huge dug-outs, the hitting tunnels and the bullpens for the pitchers with telephone connections with the team managers. KNBSB will establish their national selections to home facility in Hoofddorp, after having used outdoor facilities in Rotterdam, Haarlem and Amsterdam since decades and indoor in Haarlem and Amsterdam since many years. Eenhoorn as technical director and Steve Janssen as manager of the national team will keep office in Park 21. The other day he discussed the latest developments towards MLB games in Hoofddorp during a short visit to London. The decision requires still some more work and patience, he assured his audience.

Pioniers president Ilja Schinkel did not want to hide his emotions, when taking the microphone just before the opening of the new ball park after little more than a year of ground and field preparations and stadium constructions, since the green light was given early 2013. He is grateful for the efficient cooperation between the club’s project ETO, the construction company Vaessen, the municipality of Haarlemmermeer, the national federation KNBSB and inspiring partner MLB. Schinkel is very proud of the finishing touch in every part of the complex, where the first regular Hoofdklasse game will be played as 2014 season game nr 10, when home team Vaessen Pioniers takes the field versus Mr Cocker HCAW from Bussum on Sunday, April 20.

The indoor ceremony for the opening of the new stadium took place in the lounge, where Vaessen general manager Tom Haagmans presented Jason Holowaty, alderman Adam Elzakalai and NOC director Maurits Hendriks to hundreds of invitees. After their speeches Holowaty, Elzakalai and Hendriks took pitching positions near the Brickman created mound and threw simultaneously balls to three Pioniers catchers. The champagne sprinkled party continued in the lounge and on the terrace under the serene evening sky between Rijksmuseum and Keukenhof as nearby tourism attractions. 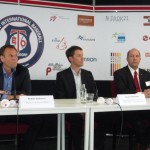 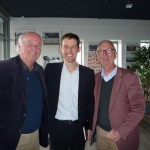 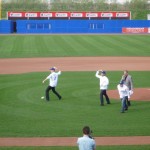 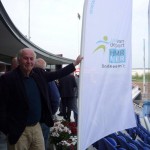