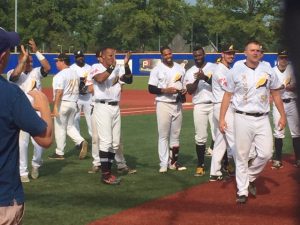 L&D Amsterdam tied the Holland Series 2019 at 3-3 on Saturday with a 4-3 win over Curacao Neptunus in game six of the best-of-seven series. Curacao Neptunus took a quick 3-0 lead after three innings, but didn’t score afterwards.

They still were leading 3-2 entering the ninth inning, but L&D Amsterdam tied the game on a RBI single by Gilmer Lampe and won it on a walk-off bases loaded walk by Sharlon Schoop. Jim Ploeger pitched five no-hit innings of relief after replacing Rob Cordemans in the fifth. Kevin Kelly got charged with the loss. Gianison Boekhoudt hit a home run for Rotterdam.

Curacao Neptunus had won the first three games of the Holland Series, but now the Pirates have crawled back to tie it after six games. Game seven will be played on Sunday at 1pm (instead of the usual 2pm spot) due to live TV coverage.