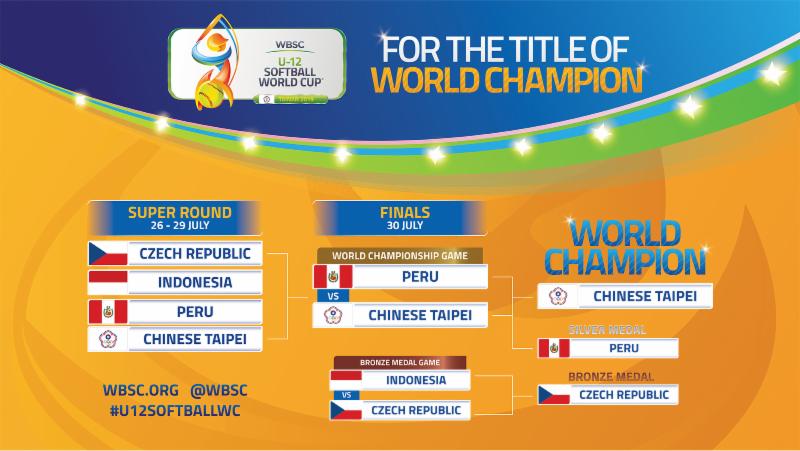 The WBSC U-12 Mixed Softball World Cup is a newly launched world cup format designed to further boost gender equality across all WBSC disciplines. WBSC Secretary General Beng Cho Low said, “WBSC is very happy to have held this new mixed team format for Softball. We have to keep thinking outside the box and breaking barriers. We are now not only the only International Federation and global sport to have a World Cup for the U12 category, but also in a mixed team U12 format. With equal number of boys and girls playing in a team, we have true gender equality.”

The Championship game proved to be far more intense and entertaining than what the group stage could have suggested. Peru took a 1 – 0 lead in the second inning and managed to defend well the subsequent 3 outs. On the bottom of the third inning LIN Wei-Chi turns the game around with a 2 RBI double. Lin will score himself as well on an RBI single of CHEN Chia-Yi, this the closed the inning with Chinese Taipei ahead 3 – 1. Peru will eventually manage one more run in the fifth to fix the score on 3 – 2.

After good quality pitching for the first 2 innings, the critical moment of the game was the bottom of the third when SPACEK Adrien hit an inside the park grand slam moving the score to 5 – 0, a partial revenge after last groups stage game’s fatal error against Peru.

Speaking after the game Czech manager Yana Chylova said “We feel very excited for this first ever historic medal” Czech Republic never won a medal in a world cup before.

Indonesia has show constant improvements during the whole 5 days of the tournament. Participating in this world cup has provided a learning experience for the team that will be invaluable in the development of these players and the softball movement in the country.