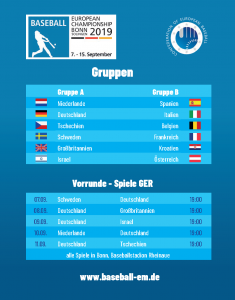 During a press conference at the ballpark of the Bonn Capitals the final roster for the German national teams for the European Baseball Championship 2019 in Bonn and Solingen was released today.

In preparation for the European Championship the German national team held a two-week training camp in the Saga region in Japan. Their opening match will be on Saturday against Sweden. The other preliminary round opponents will be Great Britain, Israel, defending champion Netherlands and Czech Republic. All German games will be played at 7pm in Bonn. Spain, Italy, Belgium, France, Croatia and Austria also are going to participate in the European Championship.

All information about the European Championship can be found at www.baseball-em.de.