The Zurich Barracudas have captured a Federations Cup spot in next year’s CEB events with a 15-1 win over KS Silesia Rybnik in the final of the 2018 Federations Cup Qualifier in Rybnik, Poland on Sunday. The Barracudas scored in four of the first five innings, including a six-run spot in the fifth to win the tournament. Alex Rubanowitz and Joshua Crouse hit home runs. Evan Brisentine struck out ten in seven innings for the win.

Silesia Rybnik reached the finals after a 14-5 win over the Barracudas in the last preliminary round game on Saturday. Zurich already had clinched the finals before the game. Kaunas County would have played a role too if not for a 6-10 defeat on Saturday morning against the Southampton Mustangs, denying a chance to got 3-1. The Mustangs scored five runs in the top of the ninth.

Switzerland already earns a spot in the CEB Cup. 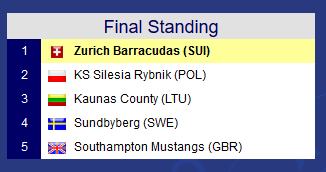