The Austrian Baseball Federation is going to have two spots in next year’s Federations Cup. The Vienna Wanderers beat the Blagoevgrad Buffaloes 5-1 in the final of the 2018 Federations Cup Qualifier in Blagoevgrad, Bulgaria on Sunday.

Rain continued to play havoc with the organizers on Sunday, as the final had to be called in the seventh inning due to rain. Three runs in the second and two more in the fifth had given Vienna the lead. Christian Tomsich struck out nine in seven innings for the win.

Two games of the tournament weren’t played at all due to rain. The matchup between Beograd 96 and Blagoevgrad had to be played on Sunday morning with the Buffaloes earning their fourth win in five games to meet the 5-0 Wanderers in the final. 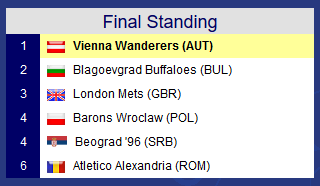