The Astros Valencia overpowered the Sölvesborg Firehawks 16-5 in the final of the 2018 Federations Cup in Brasschaat, Belgium on Saturday. With the Federations Cup win, Spain earns a spot in next year’s CEB Cup moving closer back to the top level of European club baseball.

After taking a 4-0 lead after two innings it was a seven-run sixth inning, which eventually decided the outcome in favor of Valencia. Eric Segura and Kelvin Tejeda hit home runs and combined for seven RBI. Yulman Ribeiro pitched six solid innings for the win.

On Friday Sölvesborg had beaten Valencia 13-2 on the last day of the preliminary round. Following the 10-0 shutout of the Brasschaat Braves over the ASAK Athletics Attnang-Puchheim three teams were tied 4-1, but the TQB lifted the Firehawks and the Astros to the final. 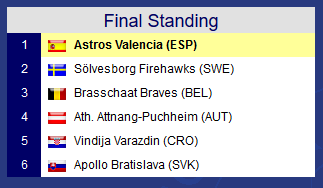