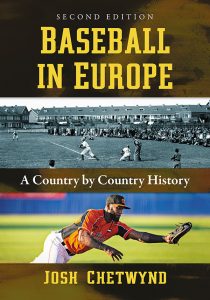 Josh Chetwynd has updated his book “Baseball in Europe” and released the new edition recently. With the success of The Netherlands in the World Baseball Classic, baseball in Europe has begun to receive more attention. But few realize just how far back the sport’s history stretches on the continent. Baseball has been played in Europe since the 1870s, and in several countries the players and devoted followers have included royalty, Hall of Famers from the U.S. major leagues, and captains of industry.

Josh Chetwynd is an award-winning journalist who has served as a staff reporter for USA Today, The Hollywood Reporter and U.S. News & World Report. A former professional baseball player in the United Sates and Europe, he has broadcast baseball in the United Kingdom on both television for Channel Five and BT Sport and on radio for the BBC. He lives in Denver, Colorado.