TAINAN, Taiwan. World No. 4 Chinese Taipei defeated top-ranked Japan, 4-0, in the Final of the V WBSC U-12 Baseball World Cup® before a sold-out 8,000-seat Tainan Asia-Pacific International Baseball Stadium on Sunday, marking three consecutive editions in which the Final was sold out.

Chinese Taipei’s winning of the youth baseball world championship generated major headlines and a social media buzz across the island, highlighted by the island’s highest elected official, Tsai Ing-wen, sharing her congratulations to the Chinese Taipei players across her millions of followers on Facebook and Twitter.

WBSC President Fraccari said: “Congratulations to the athletes, coaching staff and Chinese Taipei Baseball Association for earning the title of world champion in this very strong youth category, as most of the world’s 30 million baseball players are 12 years old or younger.

“This youth world cup tonight generated a major-event atmosphere, further establishing the sport of baseball as a global leader in the youth sports space.

“I would like to thank our great hosts and partners CTBA and Tainan City for sharing and realising this vision of creating a world-class stage dedicated to our youngest athletes, who are the future of our sport — WBSC is very excited to call Tainan City the home of the U-12 Baseball World Cup to 2027 and potentially beyond.”

Sunday’s Final was broadcast live across Taiwan via the island’s biggest sports broadcaster, Videoland, and by J SPORTS, one of Japan’s biggest cable sports networks.

The win Sunday represents the second time Chinese Taipei has won the U-12 Baseball World Cup — the highest level of competition in the category — while the Samurai Japan National Team’s silver-medal finish is the nation’s highest-ever in the U-12 age group.

WBSC U-12 All-World Team and MVP

The road to the Finals began with 34 nations competing in the continental championships/qualifiers from 2018.

As an official baseball world championship, the results from the U-12 Baseball World Cup and its continental qualifiers will impact the world rankings.

Final statistics can be found at the official website of the U-12 Baseball World Cup at u12bwc.wbsc.org. 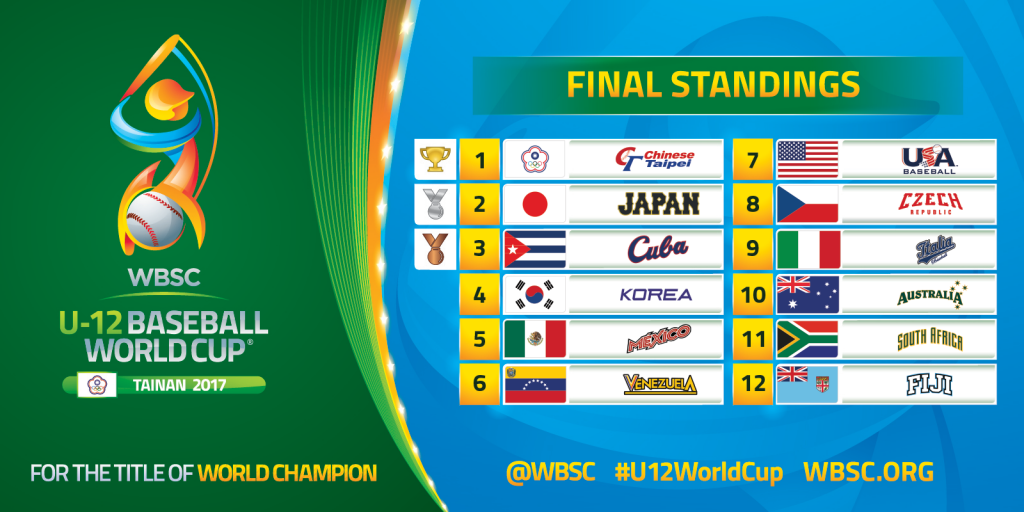