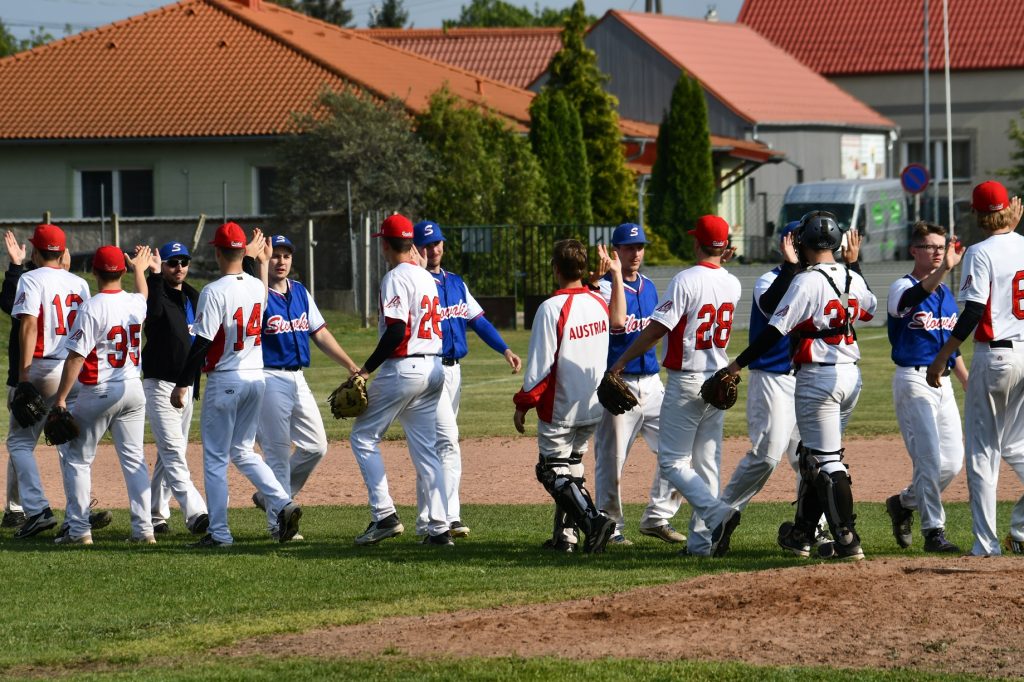 JÁNOSSORMOJA, Hungary – The Austrian Baseball Federation’s Under-22 team showed impressive growth since its last outing at the Under-23 European Championship, blasting Hungary’s Under-18 squad and overcoming an early 7-1 deficit against Slovakia’s senior national team to claim gold at the Danube Cup. The annual May 1 event brings together the three countries in a variety of sports and, with only glory on the line, the three nations use the tournament as a proving ground for their national teams.

Game 1
On a stunning day for baseball, Slovakia showed its veteran experience in a morning romp over the much younger Hungarian side. With the average age differing by more than a decade, Slovakia showed incredible patience and took advantage of every opportunity offered by Hungary’s teenagers.

After posting a 14-run second inning, Slovakia coasted to a 27-0 victory in five innings, using only one substitute and banging out 18 hits while taking 13 free passes. On the other hand, Hungary featured a whopping 18 players as first-year head coach Gabriel Fidler afforded playing time to most of the squad.

Tibor Kukucska was a bullpen-saver for Hungary, finishing off the game with 1 1/3 solid innings as a representative of the hosting Jánossomorja Rascals. Adam Zacko, at 18 by far the youngest member of Slovakia, tossed two shutout innings to start. Marek Červeny finished with three one-hit frames. A. Vaclavik and M. Noga had three hits for the victors, with the latter drawing three walks.

Game 2
Slovakia continued the offensive onslaught on its neighbours against Austria in game two, plating two in the first and five in the second. From the fourth onward, however, it was all Austria, who used a ten-run ninth to win 19-8.
Slovakia’s Biskorovajny ripped two round-trippers to centre, the only home runs in the tournament, but the 4-for-5, six-RBI performance accounted for most of the team’s offence. Meanwhile, Austria’s M. Scheicher was 4-for-6 with seven RBI and a stolen base for the victors.

Tobias Kiefer was superb in relief, throwing three scoreless innings and holding off Slovakia as Austria drew closer. Omar Dueñas had a three-K, two-frame jaunt of his own.

Game 3
The main story in the day’s nightcap was the wildness of Hungarian pitchers, who walked an eye-popping 18 batters in 5 2/3 innings. An incredible 11 came from the game’s starter in an inning-plus, allowing Austria to jump to a 6-0 lead through two.

From there, the game settled into a rhythm for a few innings, with excellent pitching from Austria’s Nicholas Schadler and Oliver Pernet. Meanwhile, Kukucska came on again to toss three excellent innings, allowing only one hit, one walk, and no earned runs. Zsolt Győri followed with a 1-2-3 inning, but Austria then plated six in the sixth before the game was suddenly called by the umpire with two outs.

The teams combined for only nine hits in the 14-1 Austrian victory and no player had more than one. Austria’s Kiefer collected four walks, a hit, and two stolen bases, scoring four runs.

After the game’s conclusion, Austria was presented with a trophy and gold medals, while the other two sides were rewarded with silver and bronze medallions.

“Austria put on an impressive performance today, showing veteran poise in coming from behind to defeat a senior national team,” commented Hungary’s coach, Gabriel Fidler. “We knew it would be difficult competition going up against two older sides, particularly a senior-level squad. The average age of our team is less than 17 and our plan was to give the full 25-man roster a chance to play as well.

“Kukucska was incredible today, pitching in game one and then starting at catcher in game two. He was willing to move to the mound after two long innings and then play right field. He also drove in our only run with a great opposite-field hit,” noted Hungary’s skipper. “We also received excellent pitching from Győri and solid defence in the outfield.”

“Fifteen players made their national team debut today and there were quite a lot of nerves on the field. Although the result was not what they imagined, this was a good experience for all and excellent preparation for the Under-18 European Championship B-Pool in July,” concluded Fidler.