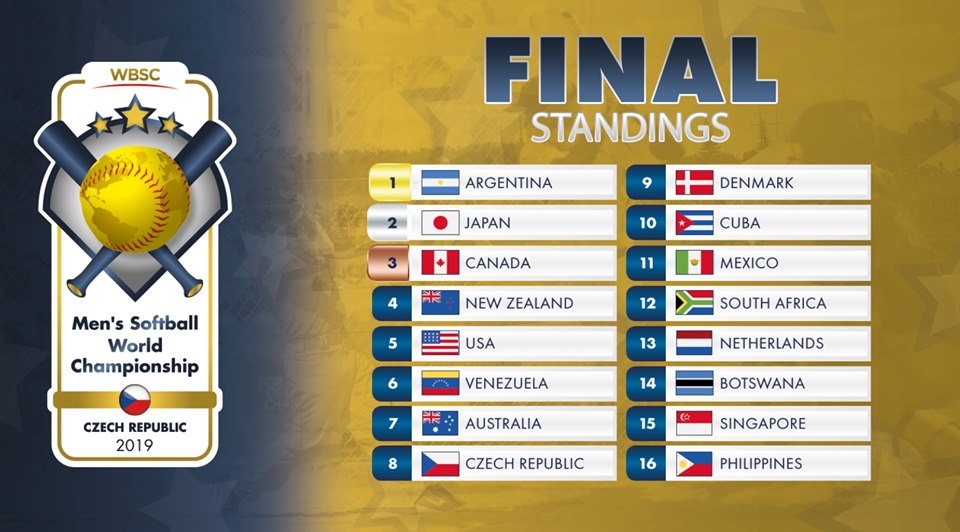 PRAGUE, Czech Republic — Argentina was crowned the World Champions in Men’s Softball for the first time in history, causing a buzz across social media. In the Final on Sunday, the South American team defeated Japan, 3-2, in ten innings, in one of the most exciting games in the history of the WBSC Men’s Softball World Championship — the highest level of competition in softball. Huemul Mata went the distance and fanned 17 to claim the win, while Manuel Godoy hit the game-winning RBI single in the top of the tenth.

Both starters pitched two perfect innings to open the game. But in the bottom of the third Japan put the first two runners on base. Takuto Tsutsui hit an infield hit to shortstop, a ball that bounced over the head of the third baseman allowing the hitter get on base. Seii Kuroiwa bunted but Gustavo Godoy made a throwing error, putting two runners on. Then Mata struck out Daishi Uramoto for the first out of the inning, but then walked Ryoyu Une and Yusuke Morita for the first run of the game. Two pitches later, with Matsuda on the plate, Mata threw a wild pitch to allow the second run of the game.

Alan Peker connected the first hit of the game, a single to right field. However, he was caught stealing second two pitches later for the first out. Later in the inning, Bruno Motroni doubled with a hard line drive to the left field corner, but then Santiago Carril hit a grounder to second to end the inning.

In the top of the fifth, Argentina made it a one-run ball. Mariano Montero doubled to the exact same spot than Motroni, and two pitches later scored with an RBI single by Manuel Godoy to the left side of the field.

In the top of the sixth Reo Koyama replaced Matsuda in the circle, but pinch hitter Ladislao Malarczuk received him with a lead-off triple to right field. Motroni was retired with a grounder to third and Carril hit a short fly to left field, but Montero hit a solid single to center field to tie the ballgame.

Japan connected its second hit of the game in the bottom of the sixth, a lead-off single by Matsuda to right field, and two strikeouts later pinch hitter Tomonori Inoue doubled to left field, putting two runners in scoring position. However, Mata fanned Tsutstui in three pitches, finishing with a high rise ball to escape the jam.

In the bottom of the seventh Kuroiwa was hit by a pitch and Japan put again the leadoff hitter on base, but he was caught stealing second, sending the game to extras.

In the first extra inning, none of the teams could even advance the runner. Koyama struck out the side to keep the scoreboard 2-2, and Mata threw two consecutive strikeouts (after an intentional walk to Matsuda), and retired the third out on a grounder to first base.

To start the ninth, Koyama fanned Motroni for the first out, and then Carril and Montero grounded to third base. In Japan’s ninth the Asian team loaded the bases with one out, and Ryoyu Une hit a grounder up the middle. Eder gloved, stepped second base and completed a spectacular and pivotal double play to keep his team alive.

In the top of the tenth Argentina finally scored the game-winning run. Manuel Godoy hit a solid single to left field to plate Montero from second, and Morita couldn’t glove the ball, allowing Godoy to reach third base, with no outs. However Koyama fanned pinch hitter Gonzalo Ojeda and Eder, and finally, Scialacomo grounded to shortstop

In the bottom of the tenth, Une advanced to third on a wild pitch by Mata. But the right-hander recovered and retired Morita on a grounder to shortstop, struck out slugger Matsuda and finally forced Oishi to hit a grounder to second base for the last out of the tournament.

This is the first flagship world championship for Argentina (after back to back junior men titles in 2012 and 2014), and the first ever for a South American nation.