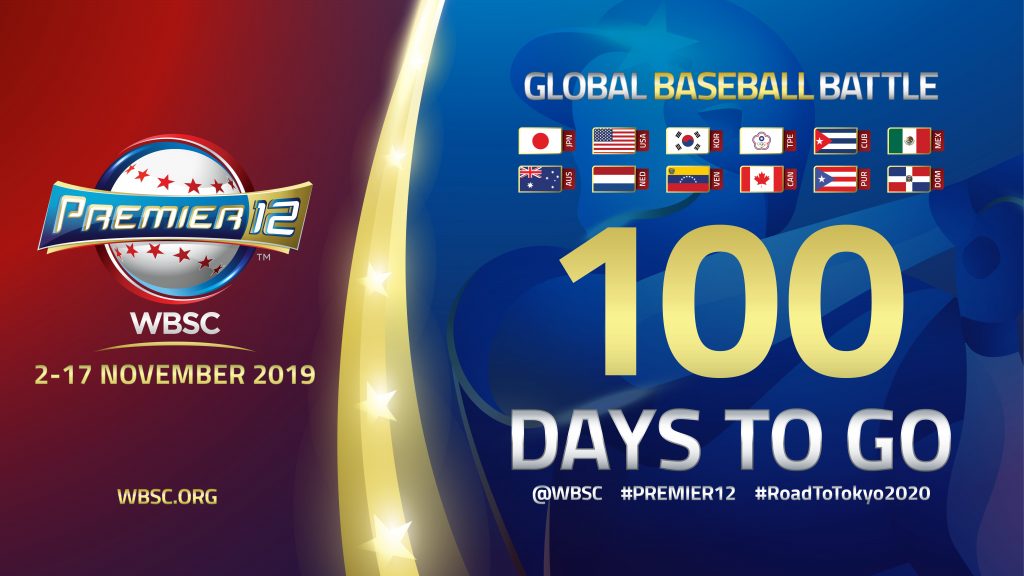 LAUSANNE, Switzerland — 26 July 2019 — Today marks 100 days to the biggest international baseball event on this year’s calendar, the II WBSC Premier12, which will be a global battle between the Top 12 ranked Men’s National Teams in the world and also serve as an Olympic qualifier for the Tokyo 2020 Games.

A series of milestones have been passed ahead of the 100-day mark, including a recent landmark agreement to award Spain’s global media giant, MEDIAPRO, the exclusive broadcasting rights of the 2019 WBSC Premier12 across the Americas.

It was also recently announced that game clocks and video replay will be introduced for the second edition of the Premier12. Swiss luxury watch brand HUBLOT will be the Official Timekeeper of the 2019 WBSC Premier12, with leading Japanese brands and 2015 Premier12 sponsors ASAHI BREWERIES, LTD., gaming giant GungHo Online Entertainment, Inc. and NISSAN MOTOR CO.,LTD. all returning.

“Following a successful launch of this new global baseball tournament in 2015, the excitement of the Premier12 continues to grow and gain momentum,” said Fraccari. “With four great hosts across four nations, and with 100 days to opening day, the 2019 Premier12 is on track to be one of the top international sporting events of the year, helping to put a global spotlight on baseball.”

The II WBSC Premier12 2019 will be staged over 32 games from 2-17 November — with opening rounds in Guadalajara, Mexico; Taichung and Taoyuan, Taiwan; and Seoul, Korea.

Host of Group A in Guadalajara, the Charros de Jalisco professional baseball club of the Mexican Pacific League (LMP), expects an economic impact of $31 million USD to be generated for the region (in accordance with official government estimates/data). Group A features world No. 2 USA, No. 6 Mexico, No. 8 Netherlands and No. 12 Dominican Republic.

The Korea Baseball Organization (KBO) — the nation’s top sports league — is the host of Group C at the Gocheok Sky Dome in Seoul, which features No. 3 Korea, No. 5 Cuba, No. 7 Australia and No. 10 Canada. The Korean National Team will enter as the defending Premier12 and Olympic Champions.

The top two teams from each group will advance to Japan and play in the Super Round, which will determine who will be in the Final.

Upcoming milestones include the revealing of player rosters, which will be one of the most anticipated moments leading to the 2019 WBSC Premier12.