Europeans in the USA, Interviews No Comments


Mister-Baseball talked with Jason Holowaty from MLB International about the recent MLB European Academy in Tirrenia, where some of the best European baseball prospects worked out for a couple of weeks under the guidance of baseball greats like Barry Larkin. Mister-Baseball: Could you give a short summary how a regular day at the European Academy looks like?

Jason Holowaty: For a person who loves baseball, it’s a pretty amazing schedule. Essentially the players are on the field all day, getting the chance to work with great coaches like Art Howe, Bruce Hurst, Wally Joyner and Barry Larkin.

A “regular” day might look something like this: Players are on the field just after breakfast for a 2-3 hour workout going through team concepts, individual position work and batting practice. After lunch, players are back on the field for a game, with some players getting additional conditioning or skill work. After dinner they might have a classroom session with one of the coaches speaking on a special subject.

MRBB: It is no secret that the Netherlands and Italy are still a little bit ahead of the curve in regards of total numbers of young and talented players, which also translates in the numbers at the European Academy. But it seems that Czech players are closing in or was their relatively big number just coincidence?

JH: You’re right. Traditionally Holland and Italy send the most players to the academy, which is a good indication of the strong development programs they have had in place for many years. But other nationals, particularly those that are running off-season academies of their own, are starting to gain ground. This year, the Czechs, who have started off-season training at three centers, had a large number of players. But the Germans have also started more quality players, as seen in their strong finish at the Euros with a team that featured several young players from their development system. Other nations like France and even Sweden are also making huge strides, even if it didn’t show in the number of players at the academy. To state the obvious, development is a long-term process. 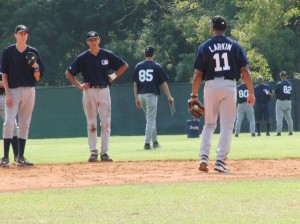 MRBB: Alberto Mineo and Rodney Daal are the newest guys to have signed minor league contracts out of the European Academy. Obviously you cannot talk about names of other potential signees. But will there be more in the coming months and can you give a general assessment of signings in academy history?

JH: There will almost certainly be more players signed from the academy in the coming months. It was a rather young group this year so there might be signings further down the track, but there was some good talent that clubs will be interested in.

Historically, the trend of signings has been very positive. The first year of the MLB European Academy was 2005. In the 6 years prior to its first start, 23 players signed MLB contracts from Europe and Africa. In the past 6 years, 56 players have signed MLB contracts from the region. It’s a huge increase that reflects not just the improving talent in Europe and Africa, but also an increased interest on the part of MLB clubs. The MLB European Academy has been a major factor in both of these aspects.

MRBB: There also was a Coaches Clinic in the first week of the European Academy. How many Coaches attended and from where? How could they sign up or were they invited? Is MLB looking into holding more Coaches Clinics in Europe?

JH: 19 Coaches from 9 Nations visited the academy from August 9-13. Actually it wasn’t a clinic but a 5-day workshop for coaches who are involved in off-season academies which are supported by MLB. Coaches from Holland, Italy, Germany, France, Sweden, South Africa, Belgium, the Czech Republic and a representative from CEB were specially invited to learn from our staff and to network with each other. It’s a great way for the many academies around Europe and Africa to improve their coaching staffs. Because of the specific nature of the workshop, we won’t look to expand it too much in the future, although we will accommodate coaches from new academy systems that we support. 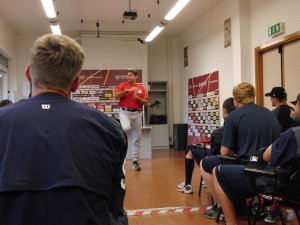 MRBB: Would it be an idea to bring the 25 best players of the European Academy to the US in the fall to play two weeks in the Arizona Fall League or something like it to get real games under the belt?

JH: An interesting thought! Two comments: 1) The players at the academy do play real games, on average around 16 over the course of the month, so we’re giving them quite an intensive August workload, and 2) We’re always looking at ways to give players more opportunities for high-level competition. In April 2011, we’ll be hosting the fourth annual Academies Tournament and we’re looking at other opportunities for summer and autumn competitions. The aim is not to take away from the limited playing opportunities they have at home. So it’s a challenge!