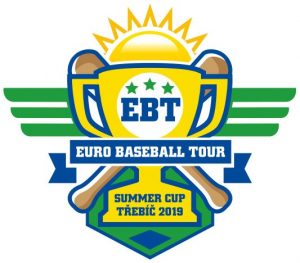 Euro Baseball Tour is a new baseball project in the Czech Republic, designed for young players, based on the masterpiece of the already established Battle At The Castle project. The goal of the EBT is to provide players with several more difficult games in the summer months in temporary created teams.

The EBT is now scheduled for the two age categories U13 and U15, and in the future we would like to extend the EBT to the U18 category. Trebic took themselves organize the EBT in categories U13 and U15 since 2019 and thanks to its experience in organizing big events and great complex, including facilities, we believe that it was the best choice.

The first edition of the EBT is scheduled from August 11th till August 16th 2019, with several activities going ahead. Everything starts with a presentation of the project (for example, this article), followed by registration of players, which will start in a few days, November 1st and will finish at the end of February 2019. The very important date is April 1, when the draft will be organized and first seven players will be nominated for their teams. The complete roster for all teams will be known by April 10th at the latest. And then the player is just waiting for the tournament itself.

There are four teams in each category that will have their manager and bosses and drafted players. Each player gets a jersey and cap in the colors of their team, where they will complete all official team activities (matches, training, opening ceremonies, etc.).

Organization of this new project is already running in full speed and you can watch the progress of the organization on the official project website at http://www.eurobaseballtour.eu or on the Facebook page @EuroBaseballTour, there is nothing easier than to start watching this Facebook page, you will not miss anything!

U15 European Championship Qualifier in Mortsel: Russia shuts out Hungary for First Place

U18 European Championship in Grosseto, Italy commences on Monday